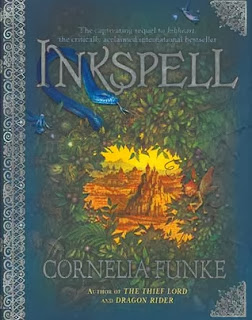 Let me take a minute to go off topic and talk about Brendan Fraser. I have had a major crush on Brendan Fraser ever since I was young.  Between Encino Man and George of the Jungle, I could not help but adore his big goofy smile. When The Mummy came out, I stopped seeing him as the big goofy guy and saw him as the suave, action man. Now I realize that The Mummy is one of the most flawed movies ever, but I still love it and watch it often. When I was living in Portland, he was there shooting Extraordinary Measures, and a few people I knew ran into him on a few different occasions and each one them said the same thing: nicest guy ever.

So when I found out he read the second and third book in the series, I was very excited. And he did a fantastic job!

Ok, enough of that tangent...on with the review!

Inkspell takes us back to the world of Mo and Meggie, now joined by Resa.  Mo and Meggie have the uncanning ability to read characters out of stories and people into them. When Meggie was young, Mo accidentally read Resa into Inkheart and read out a few of the bad guys and Dustfinger. In the last book, they defeated the main bad guy with the help of the author. In the process, Resa was brought out and the author (Fenoglio) was read into the book.

This book starts out much like the last book.  Dustfinger is looking for a way back in. He finds a new reader to read him in. This time he knows his destiny: he dies as a result of saving Gwin, his marten. He also has a new companion. Farid was read out of Arabian Nights and has been following Dustfinger ever since. When Dustfinger finally meets up with the new reader, Orpheus, he is unaware that Orpheus is a huge fan of the book and was upset at Dustfinger's death.  To help him, he only reads Dustfinger in and leaves Farid and Gwin in the real world.  Upset at this, Farid sets out to find Meggie.  He wants in Inkheart. Farid finds Meggie and Meggie agrees to read him in, on one condition: she goes too.

When Mo and Resa discover that Farid and Meggie have gone into Inkheart (with Gwin by accident), they are devastated. But their devastation gets worse when Mortola, Basta and Orpheus show up. Mortola and Basta are upset over the death of Capricorn (from Inkheart). They have Orpheus read them and Mo and Resa into the story.  Once there, Mortola shoots Mo with a gun; a weapon Inkheart knows nothing about.

The story only begins here.

I liked that this story revolved much more around Dustfinger. You get to understand him alot more and understand just why he wanted to go back, even though he thought he might die. He's a likeable yet complex character.

As with Inkheart, my major complaint with this story is that is is far too long. There are so many parts that are really boring and don't help the story at all. I really think the author could cut out about 200 pages without losing any plot points.

That being said, it's a very cute, unique story that I can see many kids thoroughly enjoying.