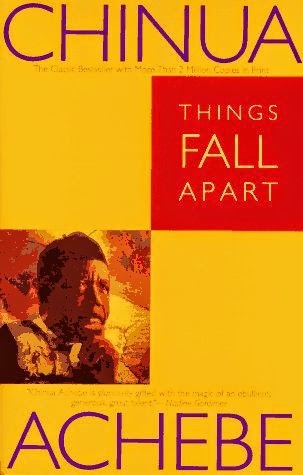 Okonkwo is a respected man in his tribe in Africa, but fears that he may some day end up like his father, who he felt was lazy. Due to a horrible crime, Okonkwo adopts a young boy who he loves dearly and treats with greater respect and love than his own son.  But when the tribe decides that the boy must die, Okonkwo even helps carry out the murder. He shows no emotion, afraid of appearing like his father, and bottles his emotions. This causes him to be increasingly violent and abusive to his wives, children, and others.

When Okonkwo accidentally kills a young boy, he his exiled from his tribe and forced to go live in his mother's homeland. There he learns about the impending arrival of white, Christian missionaries. When the missionaries arrive, the tribe soon becomes divided. Some men have converted but mostly due to being outcasts in the tribe. Others refuse, too afraid to anger the many gods they believe in. But when Okonkwo's only son decides to convert, the anger that Okonkwo has held inside can no longer be contained and his world soon falls apart.

This book was an interesting read in that it villainized neither party. I expected the Christians to be either looked at as villains or heroes, yet the author took neither approach. The Christians clearly had a misunderstanding of African culture and the difference in tribes, but were not horrific people. On the other hand, the Africans were not written as silly people with silly cultures that should be dropped or needed to change.

The main character of the book, Okonkwo, was also neither a villain or a hero.  He was man who struggled with who he was and how he was perceived. Okonkwo faced many of the problems that we as Americans face, but in a very different setting. He struggled with the concept of success and what that meant as well as being accepted and what he had to sacrifice to make that happen.

I found that one of the strongest characters in the book was Ezinma, Okonkwo's daughter and favorite child. She was very beautiful and could have married any man she wanted and lived a life of respect and wealth. Instead, she chose to stay with her mother, a woman who was very mistreated by her husband. Eventually, despite her father being viewed negatively, she sticks by his side and returns to his original tribe with him to find a suitor.

The downside to the book, is that is gets a little dull in the middle. It's not until nearly the end of the book that the Christians arrive and the action really picks up. While the rest of the book is thought-provoking, it's a little dry and dull.

Recommended for those who enjoy: cultural differences, moral dilemmas, and family drama.
Posted by Unknown at 6:00 AM