Making Up For Monday: Movie Mayhem

This week's question: What was the worst movie adaptation of a book that you have seen?


This is a difficult questions, because to truly answer it well, I feel I should have both seen the movie AND read the book. Usually, if I have read the book, I don't see the movie. A couple of examples of this are The Scarlet Letter and The Great Gatsby. I have read both the books and have heard the movies were terrible in comparison, but I have chosen not to see either one.

I also think that the movie had to be terrible on its own. If the movie was changed from the book, but translated decently on screen, then I let it slide. Two examples of this are Silver Linings Playbook and The Count of Monte Cristo. Both changed from the book rather drastically, but I liked them both as movies. Besides, I don't think a movie that actually ended like The Count of Monte Cristo would do well in theaters, which is probably why one has never been made.

So I picked two movies based on the same authors work; an author I think movies should just stay away from: Dr. Suess.

The Cat in The Hat:  Don't even get me started on this one. It was like having your childhood just ruined in one sitting. Awful, awful movie! 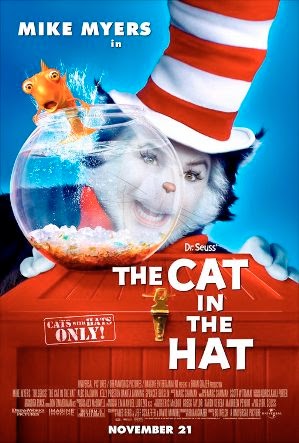 The Grinch: I think Jim Carrey can be really funny, but he was so far off of what the Grinch was supposed to be that I was just dumbfounded as to how Ron Howard thought that making this movie was okay.  Bad Ron Howard! What about you?   What movies ruined our favorite books?