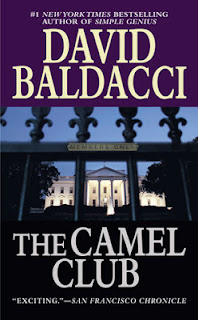 The Camel Club by David Baldacci

I decided to try this book because my dad recommended it. After about six chapters, I was confused and bored. There were so many characters and back stories introduced immediately, that I had no idea what was going on. I wanted to stop the book, but kept going since it was my dad who recommended it. I am glad I pushed through. After about 15 chapters, the book really picked up speed and I was able to catch up with the many many characters.

The story revolves around four men who spend their time looking into government conspiracy theories. While typically you would expect these kind of men to be in suits and have high level jobs, their leader, "Oliver Stone", lives in a tent outside of the White House, with very little money. These men witness a murder committed by members of the government. Considering their social status, they knew they would be ignored or blamed. So with the help of Secret Service agent, Alex Ford, the four set out to uncover the truth; the truth that could lead to full blown world war.

Other than the really slow, boring, and confusing beginning, I enjoyed this book and will likely finish the series.
Posted by Unknown at 5:00 PM