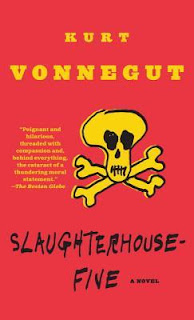 As a POW who survive the fire bombing of Dresden while being held in an old Slaughterhouse, Vonnegut struggled to put into words what he experienced. How do you put it into words? You are fighting an enemy you share a heritage with while making friends and enemies on your own side. It's not a normal life experience. It something that changes you. I think that Vonnegut mixing his own real-life experiences with a science fiction element helped him express what he felt during the war, his capture, and the fire bombing.

Slaughterhouse Five follows a man, Billy Pilgrim, and his life.  Billy leads an interesting life. Not only does he end up a POW in Dresden when it is fire bombed, but he also gets abducted by aliens AND travels through time. He has a hard time keeping everything straight and explaining his life to others.

I liked this book. It was weird and bizarre and filled with dark humor. There were a few moments were it was a bit too crude for me (mostly in the ways that one character described torture techniques) but I understood the perspective.

I would recommend this book to anyone with a slightly dark sense of humor.
Posted by Unknown at 5:00 PM