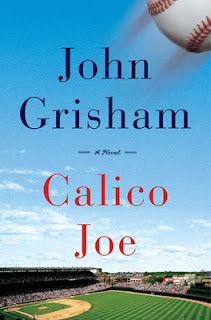 Happy birthday to me!  Since today is my birthday, I figured I'd review a book about baseball written by John Grisham, two of my favorite things!

Knowing the basic concept of this book, the fact that I loved it was not a surprise. Calico Joe is the tale of a Paul Tracey as he looks back on his childhood and remembers two baseball players who had huge impacts on his life.

The first is a young player named Joe Castle. He's a phenom in AA, and after two injuries take out the first basemen in AAA and the majors, he gets to make his MLB debut. During his first at-bat, he hits a home run on the first pitch. He gets two more home runs that game and the opportunity for a fourth. He decides to bunt instead to bring in the winning run. He is an overnight star. The next few months are just as extraordinary. He is the biggest star in the majors, and a humble, small town guy on top of it. Paul idolizes him like no other player.

The second player is Paul's abusive, arrogant, barely-in-the-majors pitcher father, Wallace Tracey. The two players meet for the first time that summer. What comes from that meeting, ends Paul's relationship with his father and his love of the game. He never plays or watches again.

Now all grown up with a family of his own, Paul looks back on the summer that changed his life.

I love baseball stories. They spark so much in me. I tend not to get choked up about movies or books. Beloved characters can die and I feel sad, but no urge to cry. But as Grisham describes the rise to fame of Calico Joe, the game, the moments that make fans fall in love with him....I wanted to cry. I guess it proves I am just a baseball girl at heart.

I highly recommend this book.
Posted by Unknown at 5:00 PM