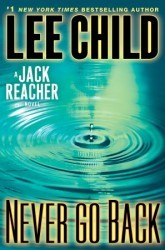 Never Go Back by Lee Child

Jack Reacher is on his way to Virginia to meet his new commanding officer.  But when he gets there, its a completely different person and this guy is not a fan. Now accused of murder, Jack Reacher must get to the bottom of the mystery, and fast!

Can I just say, Tom Cruise was a TERRIBLE choice for Jack Reacher. Ok, ok, I haven't seen the movie, but after reading the book, I don't think there is anyway he could possibly pull of Jack Reacher.  For one, Jack Reacher is much taller. :) But that is neither here nor there.

Jack Reacher is a great lead character. He's awesome, but not perfect. He's rugged and...well... a badass. This made the book fun to read because I actually cared what happened to him, but didn't feel like he was "guaranteed" to figure it out in time. The novel had a great element of suspense.

So why three instead of four or five stars? I felt like I was out of the loop from time to time. I felt like I really needed to read the 17 previous novels (or at least the one just before this). For this reason, I fully intend to start this series at the beginning and work my way back to this one. The novel was good enough to have me sold on reading the 17 previous books! This will be a fun series to throw in to my reading list from time to time.