I've Got Your Number: 4 Stars 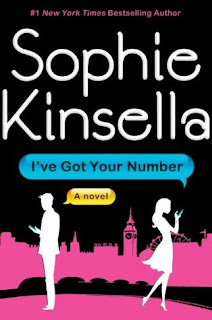 I've Got Your Number by Sophie Kinsella

I have along list of books recommended to me by friends and this was one of them. I saw the audiobook was available at the library, remembered it from the list, and grabbed it without reading the back.  Then I just popped it in the CD player and started listening. Within seconds I was thinking "Who recommended this to me? Is this a joke?".

The book is a chick lit, a romantic comedy.  Basically, this just isn't my cup of tea. So I looked up on Goodreads to see who would have been silly enough to recommend this book to me. It was someone who's opinion I value, someone who gets my taste. So, for her sake, I kept listening, even though I figured I would hate it.

Poppy Wyatt has lost her family heirloom engagement ring at a hotel. Her friends were all trying it on and she got up to go talk to the auctioneer and there was a fire drill. The ring simply disappeared. She is frantically searching for hours when the unthinkable happens. Her phone is stolen right out of her hand. Her phone with the number she has been giving out all night! She frantically goes to talk to the concierge, but he's busy. As she paces, she notices a cell phone in the garbage. She grabs it. She needs a phone and she finds a phone. She decides to start handing out this number and use this phone until her ring is found. No harm, no foul. Except not quite.

The phone belongs to the PA of a businessman, and the PA has just quit and tossed her phone. The man calls and Poppy answers. After doing him a quick favor, she tells him shes keeping the phone and takes off.  He argues some but reluctantly agrees that she can keep the phone as long until she gets her ring back as she forwards all of his messages. And so begins the relationship of Sam and Poppy.

Poppy was annoying with a capital A. Shes the type of girl who who ends every message with X's and O's no matter who they are going to. She says "footnote" constantly and uses way too many emoticons. Not to mention she is incredibly stupid and dense.  I found myself constantly yelling at the CD player "Don't!  Are you stupid?".  So I should have clearly hated this book.....but I didn't.

Not only did I not hate it, I couldn't stop listening to it. I only listen to books while I am working, but I kept looking for excuses to keep listening to this one. I'd listen on my lunch break, or while I was cleaning. I just couldn't stop. I was hooked in the story (even though you can see exactly where it is going).  Why?  I have no idea other than I really enjoyed this book and now want to read more of Sophie Kinsella's novels.She made me love Sam from the very beginning. I could just see this as a movie and Sam being gorgeous.  It would be a silly rom-com that I would watch in my room, alone, with ice cream when I had a bad day, just in book form.

I guess I found my guilty pleasure.