The Son of Neptune (The Heroes of Olympus #2): 3 Stars 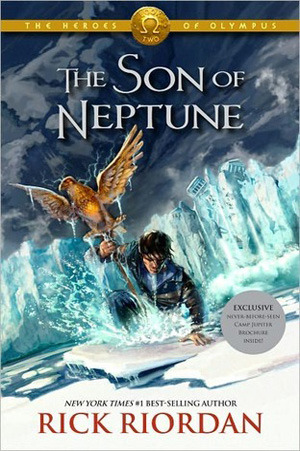 The Son of Neptune (Heroes of Olympus #2) by Rick Riordan

He's back!  Missing from the first book of the the new series, Percy Jackson returns in the this book, minus his memories.  Much like Jason, Piper and Leo were taken to Camp Halfblood, the Greek demigod camp, Percy is taken to Camp Jupiter, the Roman demigod camp.  There he meets Reyna, Hazel, Frank...and Nico. Of course Percy doesn't remember Nico, but Nico definitely remembers Percy.

Percy really enjoys Camp Jupiter and Camp Jupiter is amazed by Percy's talent.  But the fun and games end quickly when Mars, the god of war appears and tells them death has been chained. The team now must do what they can to correct the wrong and Percy must try to regain his memories and find out who is Annabeth, the girl who remains in his memory.

This was definitely not my favorite Percy Jackson book so far. After our introduction to Leo in the last book, I miss Leo.  I really wanted more Leo and, of course, he's not in this book. And while I like Reyna and her can-do attitude, I found Frank and Hazel to be big dull duds. Their characters were boring and did little to drive the plot forward. I found myself not caring about their pasts.

Also, what is up with Nico?  I kept waiting for him to be revealed as the bad guy. He's very dark and broody, but then again, he is the son of Hades!

Recommended for those who enjoy: mythology, action, and young adult novels.

Email ThisBlogThis!Share to TwitterShare to FacebookShare to Pinterest
Labels: action, mythology, YA