Confessions of a Shopaholic: 2 Stars 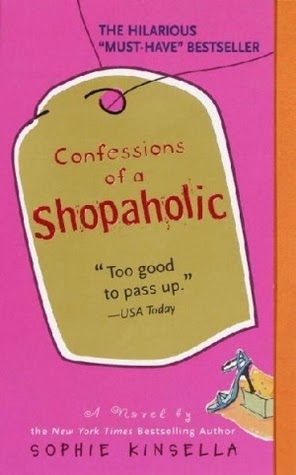 Confessions of a Shopaholic by Sophia Kinsella

Its no secret that I love reading Sophie Kinsella. Especially after I finish reading a particular heavy or depressing book, Kinsella's books are the perfect pick-me-up I need to feel relaxed and refreshed.  Her books are light and simple, but intriguing and hilarious. I usually read her standalone books but decided to start the Shopaholic series so I could have more books to choose from.

Becky Bloomwood is a financial journalist who hasn't the first clue about finances. Aspiring to be a fashion icon, she spends most of her day dreaming of clothes and shopping. Its not surprise that she finds as many ways as possible to avoid work and head to the shops.  But Becky has a huge problem; she has no self control. He accounts are overdrawn and her credit cards are exceeding their limits. She is being hounded by creditors.  What is a girl to do?  Oh yeah, shop!

There were times I found myself in Becky.  I too have tried to stick to a budget, only to find exceptions to the rule and soon find myself so far off the budget, I can't figure out what happened. Its frustrating and bills are stressful.  However, that's where me comparing myself to her stopped.

Becky Bloomwood was in a world of her own and seemed very unconcerned and uninterested in anyone else. She was a terrible employee, wasting valuable work time and not giving her work the attention it needed. She was self-centered and always thought every guy was after her.  She was delusional in that there were times she was convinced she had won the lottery and then was shocked when she did not. She even used a guy and totally planned her wedding to him FOR HIS MONEY in her head and then was devastated when he figured it out and didn't want to see her again.

To be blunt: I never liked her and really hoped she would get comeuppance. Did she?  Of course not.  Did she ever learn? Of course not.

Has anyone else read the series?  Do the book gets better? Or should I not read the six books that follow and stick to Kinsella's stand alone novels?

Recommended for those who: like shopping, want to feel better about their own financial situation, and like fashion.
Posted by Unknown at 6:00 AM