The House of Hades (The Heroes of Olympus #4): 3 Stars 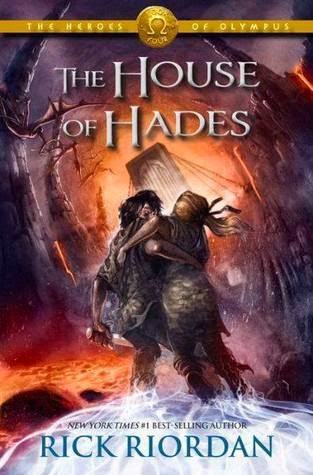 The last book ended with Percy and Annabeth trapped in Tartarus and the rest of the seven flying on the Argo II. I assumed by the title that we would learn more about the mysterious Nico, who frankly, up until this book, I was convinced was going to be revealed as a bad guy. I was not let down.

There are many battles in this book (in fact the heroes got very little rest). Riordan also brought back some old characters from the previous series like Rachel Dare, Grover, Bob, and even, the evil Kelli. It was great to know that the old heroes were not sitting on their thumbs but were also helping in the impeding war, just not "on screen".

As I implied earlier, we learned a lot of Nico in this book. In fact, we learned a big secret about Nico that helped explain why he had been acting the way out. It was like a light went on and I just said, "Well, that makes sense." I stopped hating Nico so much and realized that he was just a kid who was dealing with a lot and had no one to lean on and no one to help. He trusted no one. But that might all change now that he had his sister, Hazel around. Perhaps they could bond.

Leo, once again, is by far my favorite character. He's funny, witty, and loyal. But in this book, Leo finally gets something he has been missing since he was introduced.  Leo gets a girl (kinda)! Being the seventh wheel on the Argo II hasn't been easy for Leo, especially as a teenage boy with hormones raging. But he finally found a girl who suits him perfectly.  Yippee!

While this book did not end on a cliffhanger, it did end with the heroes knowing that they have a big task ahead of them and that some of them may not survive.

Recommended for those who enjoy: mythology, action, YA, and young love.
Posted by Unknown at 6:00 AM