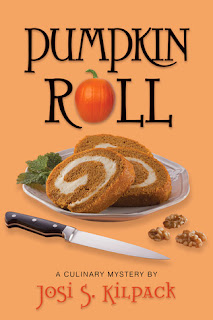 I must fully admit that this is NOT my type of book.  It's one in a culinary mystery series.  It's very cookie cutter (pun totally intended). The only reason I read the book was because of my book club. In fact, it was my sister's pick.  Both her and my mother and big fans of Josi Kilpack. I am not. I guess that just shows you how different a family can be.  :)

Now, just because I was not a huge fan of the book, doesn't mean it was terribly written or a horrible book.  The book had a purpose and target audience.  I was not in that target.

The books was meant as a lighthearted mystery with some delicious recipes. The story wasn't supposed to be legendary, life-changing, or earth-shattering. Its just supposed to be a fun read with recipes.  Personally, I didn't like the addition of the recipes.  She talked a lot about cooking and how she did it, which added nothing to the plot. That being said, the recipes are her gimmick and it works for her and her readers.

In Pumpkin Roll, we join Sadie Hoffmiller on what seems to be one of many adventures. This is the sixth book in the series (the first I read) but works fine as a stand alone novel. Sadie is visiting Boston with boyfriend Pete as Pete is watching his three grandsons while their parents are out of town. Its doesn't take Sadie long to find trouble.  The young boys are convinced the neighbor across the street is a witch and after seeing her act strange a few times, Sadie's curiosity has been peaked.

This is where the story begins to turn.  Sadie decides to try different tactics to get closer to the woman to find out her story, including baking cookies for her and offering to help her when she seems in pain while doing yard work.  As things get spookier, Sadie goes much further and begins to dig up information on the woman and attempts to call the woman's sister.  When the sister does not respond as Sadie had hoped, she basically begins to stalk her to meet her in person.  In doing so, she somewhat attacks the woman verbally and reveals just how much "research" she has done.  Call me crazy, but I would have run from Sadie and called the police.  I mean, can you imagine a woman calling you on the phone and you giving her the brush off, only for her to show up at an event you were invited to that night spouting off information about your sister and recently deceased father?

But of course the story doesn't end there.

There begin to be "attacks" on the house. Items showing up unexplained, light bulbs bursting, bedroom doors slamming, lights being turned on and off, and so forth.  How does someone keep getting into the house? How have they been unseen and unheard?  Is it a ghost?

By the time Sadie and Pete finally call the cops, things get much worse.  The "witch" gets attacked in her own home and Pete and Sadie are the top suspects.

The story was good and an interesting read.  I did not predict the ending, so it was a surprise. But I can't get over my issues with Sadie's character.  I just didn't like her.  There were also dropped plot lines (ugh...one of my pet peeves!). Seriously...who killed the dog? (And really...killing a dog?  I hate when the dog dies!)

This is my first, and last, culinary mystery.