The Year of Magical Thinking: 4 Stars 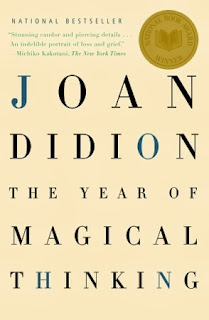 The Year of Magical Thinking by Joan Didion

I chose this book because I needed a "Y" to read through the alphabet and this popped up on a list of books at the library. I ordered it without looking into what the book was about. The book is a non-fiction about writer Joan Didion's year of attempting to cope after her husband's sudden and completely unexpected death. The timing of this book was rather bizarre.

Two nights before starting this book, I had a rather vivid dream that my husband died. I don't know how it happened; all I knew was that he was gone.  I was trying to understand that in my head and figure out what to do, all the while thinking that I needed to talk to him. I was craving conversation with him, since in moments of tragedy (or really anytime), he's the first person I go to. I was torn between knowing he was gone and thinking I really needed him to come home now so we could talk.  Needless to say, I woke up panic stricken.

Joan Didion felt the same way, but unfortunately for her, it wasn't a dream.  For weeks she woke up, wondering why her he wasn't in bed, only to remember he was gone. She refused to give his clothes and shoes away for months, because he would need them "when" he came back.  This was a woman who, when finally seeing the doctor after he was rushed to the hospital, said "He's dead, isn't he?" She ordered the autopsy, made funeral arrangements, and made sure to call and let everyone know personally before the newspaper reported it.  As an outsider, one would say she was handling it very well. She was, as the doctor referred to her, a "cool customer".  But she wasn't.

She missed her husband. She was not ready, nor prepared to say goodbye. Her brain was responding to her grief and trauma by making her feel like he was coming back. She simply kept this to herself.

On top of losing her husband, at the time he died, her daughter was in a coma. She was her only child. Although her daughter eventually recovered and was released, she suffered a brain injury and was soon back in the hospital. She too, eventually passed away, less than two years after her father.

Joan Didion was forced to cope with her husband's death while attempting to cope with her daughter's deteriorating health.While this book is heavy-hearted, I liked how honest she was with her grief. While many of her reactions were normal or typical for someone who is grieving, they were not normal or typical for her. They were reactions that she didn't fully understand.  How can you KNOW your husband is dead and still plan for his return? How can everyone say how well you are doing, yet you feel lost?

The truth is, no matter how well people handle death on the outside, grief is not easy to deal with.  Nor does it go away after a few weeks or months. While this book only covers her first year after her husband's death (and another book covers her daughters death), I am sure she still suffers from the grief of both deaths.

I think this is a great book to read to help understand trauma and grief, especially if you yourself have not gone though it.

However, I will give this warning. Considering her and her husband are extremely successful writers, her lifestyle is very different than mine.  I found at times that I was jealous of her life, despite the fact that all of her immediate family had passed away in less than two years. But that is simply because making sure all my bills are paid every month is a challenge.  Due to her success, she does not worry about money.  Does that make her tragedy any less traumatic?  Of course not.  But if you are sensitive to people who live a higher lifestyle than you, you might skip this. While I never felt like she came off uppity, she does talk about many things I will never experience and people I will never meet.  But that is her life and that's what the book was about. To skip over that, would be untrue to her reality.