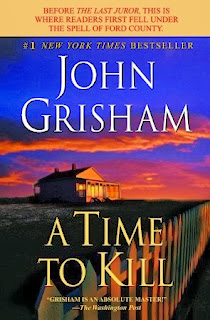 A Time to Kill by John Grisham

Seeing as I am a huge fan of John Grisham, you would have thought that I had already read his first novel. Well, I hadn't and with Grisham writing his first ever sequel, I figured I should read it.

The book started out with an introduction. This was Grisham's first ever novel, back when he was still a full time lawyer who didn't think about becoming a nationally acclaimed, bestselling author. He wrote this novel with the intention of setting it on his shelf in his office and being able to point at the manuscript with pride and say "That's my book".  Little did he know, he would not only keep writing, but end up selling millions of books.

This book was also laced with bits of reality. The book is based on a true story, but taken from the perspective of "What if...". The young, cocky lawyer, Jake Brigance, is based on how Grisham thinks he himself would have acted in this situation. Basically, Jake is Grisham through his own eyes. So of course, I was already excited for it to begin.

Set in Grisham's favorite fictional small town, Clayton, Mississippi in the mid-1980's, the story starts out with the horrific rape and brutal beating of a 10-year-old black girl by two drunken white men. Believing her to be dead, the leave her in a ditch. She is soon found and rescued, able to describe her attackers well enough that the small town sheriff knows exactly who to arrest.  After getting an informant to listen to them drunkenly brag about the attack, the sheriff arrests both men and gets a full confession from one.

Meanwhile, the father of the young girl, Carl Lee Hailey, ends up talking to his brother's one-time attorney, white lawyer Jake Brigance.  He tells Jake he wants to kill the men who did this and asks if he does, if Jake would be his lawyer.  Thinking that Carl Lee is just angry, Jake assures him that he would.  Six day after the rape, the two white boys are brought to the courthouse for trial.  As they are being lead away, Carl Lee appears from out of a closet with a machine gun and kills them.

Suddenly, Jake Brigance has a career-making case on his hands. While posing for all the news cameras in town, Jake begins to promote himself as much as possible, thinking the fame this will bring.  He soon learns that being the attorney in such a high profile case comes with its fair share of consequences, some that could be deadly, not just for him, but for those around him.

I really enjoyed the complexity of this novel. This story is not black and white (pun intended).  There's no obvious right or wrong. Should Carl Lee spend the rest of his life in jail for killing the men that tortured and tried to kill his daughter; a 10-year-old girl who lives in fear and must suffer the consequences of their actions for the rest of her life? Would the story be different if she were a white girl? Is it ok for an attorney to use the lime light of this case to advance his career?  Is it ok for the attorney to convince the jury Carl Lee was temporarily insane, even though he knows full well he wasn't?

The complexity of the story and the characters was incredible.  I found myself debating the hot topic of "should Carl Lee be acquitted?" along with the rest of the town. I also love the fact that Jake is very human.  He's not the hero who steps in a does no wrong. He's the hero who tries to be a good person, but also makes many mistakes along the way. For this being his first book, Grisham really nailed it.

So why did I rate it a 4 and not a 5?  I have an extremely hard time with rape scenes.  I realizes he wanted to set the mood for the novel by starting out with the rape, but it was almost too much for me.