The Lightning Thief (Percy Jackson and the Olympians #1): 4 Stars 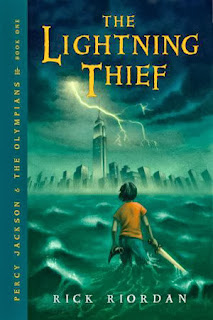 The Lightning Thief by Rick Riordan

I know I talk a lot about not liking kid's books or fantasy, but I decided to read the Percy Jackson series for a teenager I know who is obsessed.  I figured it was something we could talk about.  Well....Percy Jackson had two major exceptions to my preferences.

1. Rick Riordan has a son who struggled with learning disabilities in school.  He hated reading and he hated school.  His father began telling him stories at night about a young kid named Percy Jackson who also struggled in school, but it turns out he was half-Greek god. Riordan eventually started writing the story down and eventually sold the book. Here is the incredible story. For that reason alone, I would have read this series.  It tugged at my heart strings.

2. I love Greek mythology!  I'm not sure if its because I grew up watching Hercules with my dad (yes, the Kevin Sorbo television series) or if because I studied it in high school and became fascinated, but its one exception to my no-fantasy rule.

The story revolves around a young boy named Percy Jackson who struggles in school.  It turns out the reason he struggles so much is he is the son of a god and now he is the only hope to prevent an all out war between the gods.

The story is definitely meant for a younger audience, since there are some obvious plot giveaways right at the beginning.   But most of those I could solve because I know a lot about Greek mythology, something Riordan stays very similar too. I wouldn't expect a ten year old to know all that stuff.

The book does have a great sense of humor.  Riordan uses a lot of sarcasm (I love sarcasm!) and quick wit with his characters.  The story also happens quickly with a lot of of moving parts.  This is obviously meant for his ADHD son, but makes the story very entertaining. Its light-hearted and doesn't take itself too seriously.

I will happily be carrying on in this series.