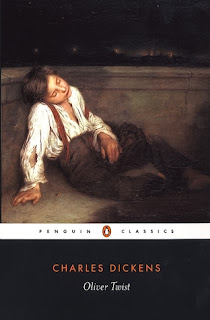 I decided to finally read this classic because I needed an "O" in my adventure of reading through the alphabet.  But I honestly wanted to read it since I have come to adore Dickens.

Frankly, before reading this book, my only knowledge of this book was two sources:


Yep, that was it.  A Disney movie and a television show about a book obsessed pooch. Of course these are from my childhood, so I haven't even seen those in awhile. So why not read the actual book now that I am an adult?

Oliver Twist is the tale of a young orphaned boy in London with no past.  His life is a series of misunderstandings and misfortune. Due to the greed of others, Oliver can never seem to catch a break.  Every time you think he's finally found a way out, someone else's greed knocks him right back down.

There is an overwhelming tone in the book from those who have money or power, that those who are poor deserve what they have been given.  Its almost as if they made their choice to be poor so they must deal with the consequences. This "principle" is closely monitored throughout the novel.

Let's take a few characters and look at their circumstances versus their nature:

Fagin: Fagin is obviously one of the poor characters in the book. He is mean and greedy, training boys to steal for him. When Oliver finds a home, Fagin wants him captured so his operation isn't revealed. His greed overpowers all his other emotions including empathy.

Sikes: Sikes is also poor and a thief.  He is a lot more brutal than Fagin.  He too is so greedy he cares about little else.

Crackit: As an associate of Sikes, Crackit's greed is all consuming. He'd rather kill Oliver than allow him to leave the life of thievery.

These three men are poor. They also lack compassion, heart, and frankly human nature.  But let's look at a few other characters.

Oliver: Born in a workhouse with no parents or clue to his past, Oliver has always been in need of basic human necessities. Yet when on his own, hungry and cold, and faced with the chance to gain by stealing from others, Oliver always declines.

Nancy: Having once been one of Fagin's pickpockets, Nancy has always been poor. She steals to survive.  All grown up, she begins to care for Sikes. She is always looking for a way out for Oliver. She knows her life is soul crushing and she wants Oliver to have a chance.  She, herself, is offered the chance to get out and make a life.  But she always declines.  Why?  Because despite their nature, she loves and cares for Sikes and her other comrades.

Jack Dawkins a.k.a. The Artful Dodger: Also born into a life of poverty, Jack has begun to steal to survive.  He also recruits others for Fagin to train. He finds Oliver when he is hungry and cold.  He introduces him to Fagin. Why?  Because to Jack, Fagin teaches you how to survive. While the life is not morally correct, it's the only way he now knows to survive.

These three characters start out with nothing (and for two of them, they end with nothing as well).  While Nancy and Jack don't exactly do good, they are trying their best and trying to help people, even if its helping them learn a life of crime.

Now what about rich characters?  Are they automatically good?

Monks: Born into wealth, Monks is really Oliver's long lost half-brother.  Driven by greed, Monks wants Oliver's parentage hidden, even if it means Oliver dies.  Why?  So he can have money.

Mr. Bumble:  Born with more money than others, Mr. Bumble is a church official who is to help care for paupers. He in no way enjoys this task. He treats the poor as if they were horrible criminals who must suffer.

Mrs. Corney:  She is the head of the workhouse Oliver was born at.  Although she is given money to care for the poor, she spends more of it on herself and skimps on the basic necessities for the poor.

These three characters were not only born into money, but were given the opportunity to help those in need. Despite being given far more advantages, they too were greedy.

Mr. Brownlow:  Born with lots of money, he thinks Oliver tried to pick his pocket.  Even when he believes this to be true, he shows compassion to Oliver. He takes him in and shows trust.  When Oliver disappears, he not only searches for him, but realizes who he is and leaves the country to track down Oliver's past.  He has no real reason to go so far out of his way, other than he genuinely cares for the boy he barely knows.

Mrs. Maylie:  After Oliver's is forced to "rob" her, she ends up taking him in and hiding his "crime" from the police.  Not only this, but we soon learn that the niece she has raised is of no relation and she took her in out of the kindness of her heart.

Harry Maylie: Born into wealth, he falls for Rose, the girl his mother took in. While his mother worries that if they marry, his social status will drop and he will fall out of love as a result, Harry does not care and wants to marry Rose anyway.  He too cares for Oliver and the situation at hand, asking Oliver to keep him in the loop so he can help whenever possible.

These three characters were also born into wealth, but still came out to be good and honest people, although not perfect.

I love that throughout this story, Dickens gave several examples of different people.  His point was that wealth and social status do not necessarily determine how good of a person you become. You can be poor and good, poor and bad, rich and bad, rich and good, or some sort of in-between.

I did however give this story three stars because I got bored.  This is likely because I already knew how this would end (for the most part) and so there was no real mystery or suspense.