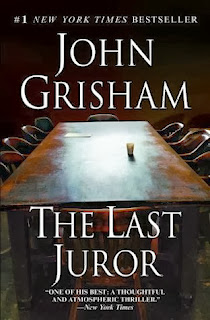 The Last Juror by John Grisham

The Last Juror takes place in the same fictional town as A Time To Kill and includes several of the same characters. It takes place before Jake Brigance's heroic rise to stardom.

Willie Traynor, a 23-year-old college drop out, bought a bankrupt newspaper in the small town of Clanton, Mississippi. Not long after he purchased the paper, a horrific crime was committed.  A woman was raped and murdered and her two young children were witnesses.  The suspect is Danny Padgitt.

The Padgitt family is a powerful one in Clanton.  They are rich, but not because of anything legal.  They are violent and feared. Trying to find a jury that won't be bought or threatened takes careful and calculated efforts. Taynor is surprised when a friend of his, an elderly black woman, is called to the jury.

With bated breath, the town waited for the final decision. When Padgitt was pronounced guilty, he erupted and threatened to kill each member of the jury.  The town was on edge, but with a life sentence, most thought they were safe.  But, sadly, that "life sentence" ended eight years later, and members of that jury began to die.

Unlike most of Grisham's fast paced legal thrillers, this book is a much slower pace, taking place over nine years, and is from the perspective of a journalist. The journalist deals with a number of different situations during the book, most of them helping him find out who he is as a person. He makes a few friends and a few enemies along the way.

Like most of Grisham's novels, the character development was exceptional. You feel compassion for characters you like, annoyance with those you don't and even fear the ones who demand fear.  He does such a great job. I will always look forward to his novels.