It's Kind of a Funny Story: 4 Stars 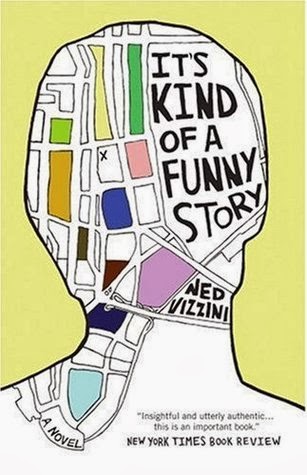 It's Kind of a Funny Story by Ned Vizzini

I first became interested in this book when my husband and I saw the movie not long after it came out. We have a terrible time agreeing on movies to see in the theater but this one had Zach Galifianakis, who he loves, so we decided to see it.

I loved it!  I knew immediately I wanted to read the book so I added it to my to-read list, but of course that's where it sat for years. But then my Secret Santa sent it to me the first week of December, and I decided I was going to read it in January. Unfortunately, the author, Ned Vizzini committed suicide just before Christmas. I was really saddened by his death and knew there was no more procrastinating, I needed to read it. So...I did.

The story revolves around 15-year-old Craig who lives in New York City and is very very depressed.  One day he decides to kill himself but decides to call the Suicide Hotline beforehand.  They direct him to the Emergency Room at the nearest hospital, which is just a couple blocks, and there he goes. Craig expects to talk to someone, get some pills and be on his way.  But when you tell a hospital you have a plan to kill yourself, you get admitted to the Psych Ward.  And Craig was stuck there for at least five days. This is the story of those five days.

I was drawn to this book for the same reason I was drawn to Silver Linings Playbook: mental disorders are a big part of my life. While my experience is not nearly as extreme as either book, these authors both hit the nail on the head in describing what it's like. Vizzini based this book almost entirely on his personal experience battling depression (a battle he sadly has lost) and his time in a mental ward.

I have battled depression most of my life. I have never been as extreme as Vizzini in that I never wanted to kill myself. But he is so accurate in things that I felt that this story just hit home.

While my depression started in the 4th grade, it didn't get bad until high school. Just like Craig, I struggled with high school in every way.  I struggled with classes, beating myself up if I didn't get perfect grades. I struggled socially, always feeling like an outcast who was faking her way through. I felt like a failure in life. Each day I struggled to wake up and the worse the day was, the less I ate. The worse I felt, the worse I acted and the more embarrassed I became about being a "freak".

Most people experience depression at some point in their lives. Whether it's clinical or situational, I think everyone can relate to the feeling. I also think that every kid struggles in high school. Its a hard time in most people's lives. This story helps people understand that it's ok to feel these things and it does not make you a "freak".

Societies view of mental disorders is coming a long way. While often times this is still how it is viewed:

At least now we have more and more books and movies coming out that show it's not uncommon, it is real, and there is something you can do about it.