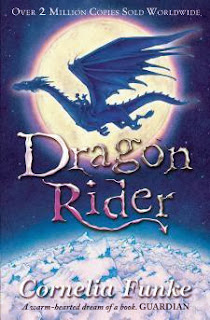 I decided to listen to this book because Brendan Fraser was the reader.  Have I mentioned my ridiculous crush on him? Well, let me tell you, I have a big ol' crush on that man.  He's just so adorable!

As a reader, he is pretty entertaining. He makes sound effects and has a wide range of voices.  I can just imagine him reading to young kids. I bet they would be enthralled!

Anyhow, in Dragon Rider, there are dragons (duh!) who hide in a certain part of the world, terrified of humans. But the humans keep getting closer. An older dragon recalls a wondrous place where the dragons could roam free called the Rim of Heaven. The problem is he doesn't actually know where it is.  Firedrake, a young dragon, and a Brownie named Sorrel volunteer to go find this magical place and save the dragons.

As the journey sets out, Firedrake and Sorrel gain two companions: Ben, a human boy, and Twigleg, a homunculus. But Twigleg has a big secret. He is spying on them for Nettlebrand, a flightless, gold-covered, dragon-like creature who wants to kill all dragons.

But the secrets only begin here.

This was another cute story from Funke. She has a creative mind and the ability to create wondrous imaginative worlds combined with our reality. Her characters are unique and relate-able. I can see why kids love this story.

I had the same complaint for this book as I did for Inkheart and Inkspell: it was unnecessarily long. Funke focuses on a lot of details to create her world, but the attention to detail bores me. I could have done with less descriptions and more focuses on the plot.