It's that time of the week when I participate in Top Ten Tuesday hosted by The Broke and The Bookish.

I chose to list TV shows because I tend to watch more TV shows than movies lately.  No use in delaying; let's get started!


1. Community: When this show first came on, I decided to check it out because I liked Joel McHale (from The Soup).  But after the first episode, I stopped watching. I felt the show was "cookie cutter".  It was going to be a show based solely around whether or not Jeff and Britta got together. But if I had just kept watching, I would have realized the show was about to take a dramatic and hilarious turn. Filled with marvelous themed episodes and prolonged jokes (like Annie's boobs), the show regained my attention quickly.  #sixseasonsandamovie

2. Supernatural: I started watching Supernatural when it first premiered because I LOVE ghost stories and the two main actors are very attractive.  It didn't take long before I was hooked.  The show was very serious with a lighter element of humor for the first few seasons.  Then they tried something new.  The show is still serious through most episodes, but there are now a significant portion of silly episodes that crack me up.  The addition of the character of Castiel was brilliant  This is cast that seems to love what they do and who they work with every day.  Totally worth watching.

3. Psych: Speaking of silly shows with themed episodes, enter Psych. The show was about a fake psych detective and his straight man, reluctant side kick. With themed episodes like Dual Spikes (aka Twin Peaks), it serves as a mini-reunion for some old shows and movies. It's worth a watch, even just for the casual viewer.

4. Friends: I am one of those people who has watched very episode about 50 times and still, if I turn on the TV and its on, I will watch it again, laughing at all the same jokes, even though I know they are coming. (But I chose to ignore the fact that Joey and Rachel were ever a couple). 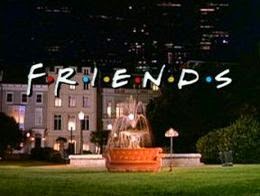 5. Desperate Housewives: This show started out as a guilty pleasure. When the Blockbuster across the street from my old apartment went out of business, they would sell whole season of shows for $5.  I got the first 4 season for $20, never having seen an episode.  I was a big fan f the show Sports Night, starring Felicity Huffman (love the reference in Season 2, Episode 5). I watched the show, slowly realizing it was hysterical. With reoccurring guest stars like Nathan Fillion (Firefly) and John Barrowman (Doctor Who), it's enough to keep the nerds happy.

6. Firefly: This show is a cult classic. When it first started, I was tempted to watch it because of Nathan Fillion, who played Johnny is Two Guys and a Girl (Love that show!) but ended up not because it looked stupid. My dad loved the show and after it was cancelled, I got it for him for Christmas. Trapped at home during a cold long winter break, I ended up watching it out of boredom.  BEST. DECISION. EVER! The show is hilarious and VERY well written.  Way to go Joss!

7. Arrested Development: Yet another show I didn't pay attention to until it was cancelled. I think I watched about a season a week once I finally started it. Brilliant show!

8. The Blacklist: This show is well written, well acted, and engaging. It's the only current show I am really keeping up with right now. James Spader is brilliant in his role.  You can never get a read on the guy!  I can't wait fr season two to start.

9. The IT Crowd: If you don't understand British television, especially the comedies, this show can help bridge the gap. The show is so funny, it caused tears more then once.  It's highly quotable and worth watching again and again. Season Two is by far my favorite.  It's streaming on Netflix now! Check it out!

10. Sherlock: My fondness for Martin Freeman is what made me watch the first episode (and a phone call from my dad telling me I needed to watch it). Now I adore Benedict Cumberbatch. As a modern day telling of Sherlock Holmes, Mark Gatiss and Steven Moffat hit the nail on the head with this one. This too is well written and beautifully cast.