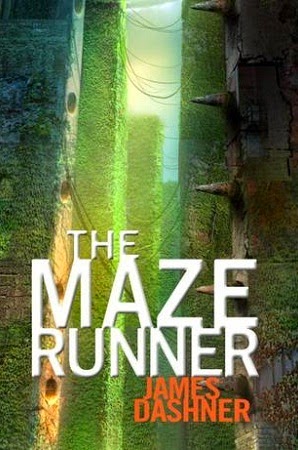 The Maze Runner by James Dashner

Thomas woke up in an elevator with no memory of who he was, or where he came from. All he knew was his name.  When the elevator opened to the Glade, he realized he was not alone. Every boy there had arrived the same way; without memory.  Outside of the Glade was a giant maze.  Does it hold the answer to everything?  And why does Thomas have faint feelings of recollection?  And why did a girl (the only girl) appear on the elevator the day after Thomas; a girl he feels connected to?

#1: This is a YA dystopian novel. I don't like YA or dystopian novels.  I only read this for my book club.  I wanted to note that right off the bat, because that probably is a big portion of why I didn't like this book.

#2: The language was obnoxious and distracting. The author made up a profanity for the kids to use, and let me tell you, they used it ALL THE TIME.  "You are the shuckiest shuck-faced shuck that ever was."  Yes, that is an ACTUAL line from the novel.  What's worse, is the language is literally just replacement words for ACTUAL swear words.  Shuck=Fuck, Klunk=Shit, and so on and so forth. If you are replacing a swear word (especially with rhyming words) with another word, its STILL swearing. Either use the real words or just don't swear.  It would have been fine if the words ended up having a purpose to them, but I felt like the only purpose was to swear without actually swearing and the end result was a major distraction.  Also, the last 1/4 of the book seemed to have dropped the swearing practically all together, which was just sudden, strange, noticeable, and distracting.

#3: These kids were kind of slow on the uptake. They are supposed to be 14-16 year old boys who are incredibly smart, but I felt like they would look at obvious answers for a ridiculous amount of time. Thomas himself would question almost everything, but not not bat an eye at things I am sure most readers questioned (which were clues to the end).  I understand that they are young boys, but I think if the author wanted their ignorance to be believable, he should have lowered their age to about 10.

#4: The end was disappointing and the characters didn't grow. I expect that most novels end with the characters having progressed.  I didn't feel that way in this book. The kids have spent years trying to solve this riddle and the answer came because it was given to them. I don't want to spoil anything, but if you read the book, you'll see what I mean. Its like the answer was finally handed to the kids through Thomas.

#5: Anyone seen Cube? I felt like this was a tame, YA version of this movie.

Now, you may be wondering why I didn't give this book a rating on one star, and the answer is simple: the concept was awesome. I loved the intrigue and mystery.  I just didn't like the author's interpretation of the concept.

Rating: PG is you don't think fake language is swearing, R if you do

Email ThisBlogThis!Share to TwitterShare to FacebookShare to Pinterest
Labels: dystopian, thriller, YA