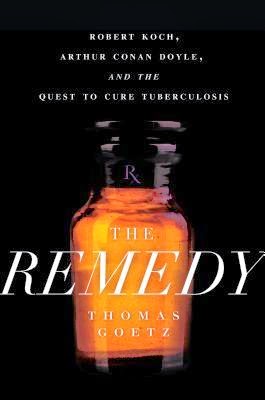 The Remedy by Thomas Goetz


There is a house not far from where I grew up that is tucked away behind a wall of shrubs and bushes. You can see it through the leaves when you get close. It's a light gray stucco with light blue trim that is well taken care of, surrounded by a well-manicured lawn that is tastefully decorated in mild manner. As a child, I decided that Sir Arthur Conan Doyle lived here. Why?  I have literally no idea. I mean, I know I liked Sherlock Holmes and I know I loved the house, but why I decided to pretend Doyle lived there, I guess I will never know.

So seeing as I was a big fan of Doyle from back in the day, I jumped at the chance to read The Remedy: Robert Koch, Arthur Conan Doyle, and the Quest to Cure Tuberculosis. I had no idea that Doyle had ANYTHING to do with curing tuberculosis. What a fascinating tale and concept.

While the tale was rather fascinating and interesting, I did find myself rather disappointed. The title leads you to believe that the Doyle had far more to do with the "quest" than he really did. The book does go into his biography a bit, which was fascinating in and of itself. It also has the tale of tuberculosis and the fear that came with it. But where the two tales meet, I guess I just expected more.

Other than my disappointment, the book was VERY well written and engaging. What an excellent writing style!