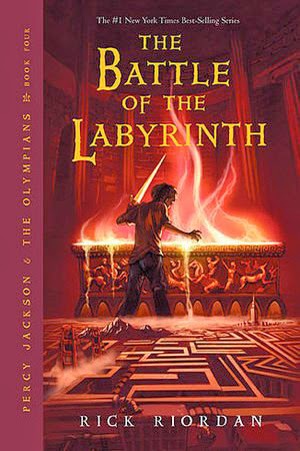 The Battle of the Labyrinth: Percy Jackson and The Olympians #4 by Rick Riordan


We join young Percy once again, this time as he prepares to enter high school.  But that's the least of his concerns.  In the world of gods and titans, war is on the brink and preparations are being made on both sides. This time, Percy must adventure into the labyrinth with Annabeth, Grover, Tyson, and new-found friend, Rachel.  Unlike the others, Rachel is entirely human. She can merely see through the "mist". This makes her an asset because she can find her way in the labyrinth and guide them through. Annabeth still holds out hope that Luke, her old friend who has teamed up with the evil Titan Kronos, will see the light and come back to her side.  Percy thinks Luke is lost forever.  And with a prophecy of "lose a love to worse than death", Annabeth fears Percy may be right.

Once again, I love the story that Riordan tells.  Percy isn't always right and is constantly making mistakes.  I love the "hero" that is really just a kid trying to figure life out. His humor is sarcastic wit, which is my favorite!

I am excited to be almost done with this series for one major reason:  Jesse Bernstein DOESN'T read the next one.  I can not stand how he reads these books.  His inflection is off, missing the sarcastic note and his voices are awful.  The hippocampi neigh-talk.  NEIGH-TALK! Its so annoying I want to rip my ears off!  Seriously, who picked this guy?!