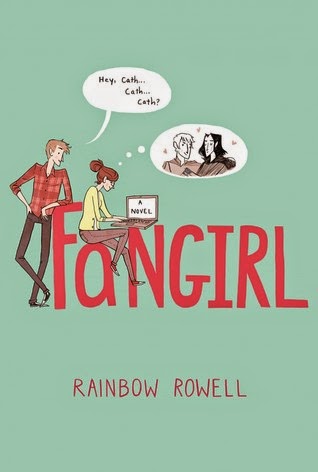 Fangirl is a story of a young girl, Kather, who goes off to college and is very antisocial.  She spends most of her time writing fan fiction of her favorite book series about Simon Snow. Simon is going to school to learn magic but is fighting constantly with Baz, a young kid hiding his vampire nature.  She twists it by making them gay lovers. This totally reminds me of when Tom Felton was on Conan O'Brien and he showed him the gay art of him as Draco and Harry Potter.  So funny!

Anyhow, Kather is about to have her world dramatically changed when she shows up to college and a boy is in her room.

Rainbow Rowell is a phenomenal author who I will likely never read again.  I know, saying that is like sacrilege.  But this is the second book I have read by her and I have a personal issue with both that makes me want to avoid her books in the future. I thought the first was a fluke but the second indicates a trend. What's my issue?

In both Fangirl and Eleanor and Park, Rainbow ends her books without fully concluding the story. She greatly leads you to a certain place, but never actually ends it, leaving the ending up to you.  While most people seem to love this style of Rowell, I do not. I need closure!  And my assumed ending isn't what I want. I want her ending. It's her story and her characters, so I want HER ending; not mine.

Fangirl leaves far more open than Eleanor and Park. How does the book series end?  How does Carry On end?  What happens with Levi? Does Kather do the deed?  What happens to Ren over the summer AND the next year?  I  want to know!

My other issue with this book is I am not a fan of Harry Potter or Twilight, much less fan fiction.  I had a really hard time relating to the character and found her so frustrating. The book was still entertaining enough for me outside of that, but I found myself rolling my eyes A LOT.