Who Moved My Cheese: 3 Stars 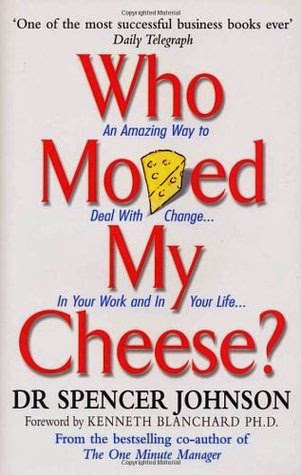 Who Moved My Cheese? By Dr. Spencer Johnson

When I was in college, by professor had an obsessive with Kenneth Blanchard (The One Minute Manager). I have seen this book all over and finally decided to read it.

Who Moved My Cheese? is a book for anyone on the work field (or really anyone at all) and deals with how you cope with change. Using the analogy of mice in a maze, Johnson shows different reactions to cheese that has moved from it's usual spot. The basic concept is "Don't whine about it, change your attitude."

This is a fairly common principle and therefore was not really thought provoking or thought changing. My dad always said when we were kids "Does whining about it change it?  No. So stop whining and do something about it."  I have a feeling my dad wasn't the only one who said this to his kids, so I don't think I am the only one who was not changed by the book.  What I do like is the ease with which the concept is relayed and the motivation it employs.  We have all worked those jobs that go through big changes and everyone gets worried/angry/frustrated/bitchy. I feel like this book would be a good reminder of the "whining gets you nowhere" concept for those hard times.