The Sea of Monsters (Percy Jackson and the Olympians #2): 3 Stars 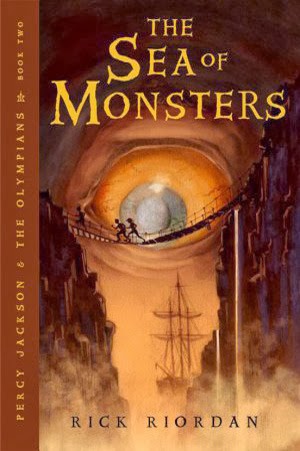 The Sea of Monsters by Rick Riordan

Once again we join Percy Jackson and his adventures as a half-blood. Percy is at a new school where he is less than popular, but he did make one good friend. Tyson is a bit slow but he's nice and rather large. Both Tyson and Percy are attacked at school, but saved by Annabeth. They head off to Camp Half-Blood to help in the battle against Luke and the Titans who want to take down the Gods.

At Camp, Thalia, who "died" and was turned into a tree years earlier, is miraculously turned back into a human. We also learn that Tyson isn't just a regular human.  He is a cyclops and a son of Poseidon, making him Percy's half-brother.

Percy has been having weird dreams about Grover, who went on a quest to find Pan. Along with Annabeth, Tyson, and Clarisse, Percy heads out to save Grover, who seems to be trapped by a cyclops in "the sea of monsters", also known as the Bermuda Triangle.

This was another fun read from Riordan.  He has great sarcasm and wit in his tales that make them fun to read.