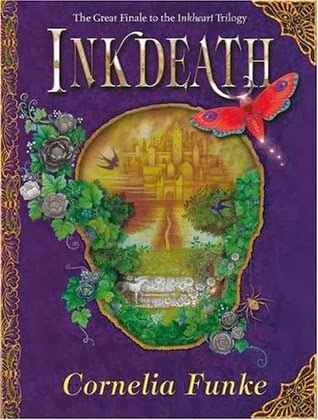 As the third and final part of the Inkworld series, Inkdeath take us to where we left off in Inkspell. Mo, Meggie, Resa, and Farid are all trapped in the book Inkheart still after being read in by Orpheus, who is there now as well. Dustfinger has died and Elinor is still in the real world. Farid has vowed to find a way to bring Dustfinger back, and being in love with him, Meggie wants to help.  Mo, the other hand, is still stuck being the Bluejay and wants to right the wrong done in Inkspell by writing the three words in the white book that will kill the now immortal Adderhead.

The original writer of the book, Fenoglio, is still there but has gone a bit insane and doesn't write anymore. So in order to change the story and bring back Dustfinger, Farid is working for Orpheus. Orpheus is slowly changing things about the world but won't bring Dustfinger back until he can meet with the Bluejay.

Mo, who is now kind of enjoying being The Bluejay, and Orpheus meet.  Oprheus says he can bring back Dustfinger if he dies in the process.  What this actually means his Orpheus will call the White Women to come take Mo to the world of death to bring back Dustfinger.  Of course Meggie and the now pregnant Resa just think he has died.

In the death world, Mo meets Death. Death agrees to let Dustfinger go back as long as Mo goes and actually writes the three words in the white book to kill the Adderhead or else he will bring Dustfinger, Mo and Meggie back to the death world forever. Now Mo must save them all by killing the evil and decaying Adderhead.

This book, like the other two, had one major flaw.  It was WAY too long. I really felt like it could be cut in half without missing much of the plot.  There is so much filler in these books, that I find myself drifting off and not really paying attention.  I am not sure how kids are supposed to stay focus on this story when as an adult, I barely can.

Other than that, I liked this one better than the other two because we finally got to know Mo.  He was kind of an unknown character in the first two, even though he was a main character.  He was just so stiff and emotionless, I didn't feel like I knew him at all.

Dustfinger is still my favorite character.  He is clever and deep in back-story.