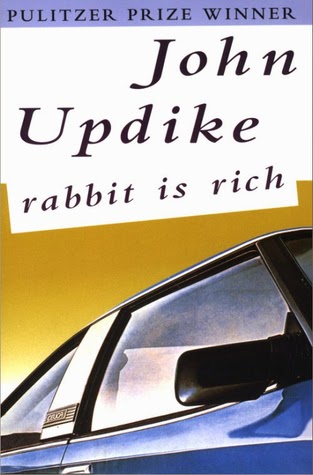 Rabbit is Rich by John Updike

Ugh..... I was really close to leaving my review at just that.

Rabbit is Rich is a Pulitzer Prize winner so I read it as part of my challenge. It is actually the third part of a four part series following Harry "Rabbit" Angstrom. After what seems to be a troubled past (which happens in the first two books), Rabbit has finally settled down and seems somewhat satisfied in his life.

Rabbit owns a Toyota dealership during the gas crisis of the 70's. Even though the rest of the country seems to be struggling financially, Rabbit is actually doing pretty well. He's somewhat happy in his marriage (I guess happier than he was).  He even has made amends with those in his life he once had a rocky relationship. Then his son comes home from college in hopes of working at the Toyota dealership and Rabbit isn't sure his son has worked hard enough to deserve such a job.

I did not like this book at all and that is for two big reasons:

1.  Nothing happens!  The book is so unbelievably boring.  What does happen in this book is just mundane and boring, and frankly I just didn't care.