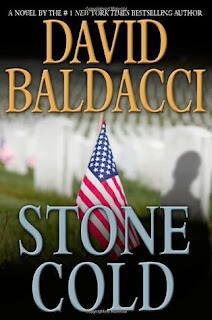 Once again, we join the Camel Club (Reuben, Milton, Caleb, and Oliver) as they battle evil government officials.  They are joined again by Annabelle, the con artist, and Alex, the Secret Service Agent.

As we left it off with The Collectors, Annabelle has conned a high powered, not-so-nice, casino owner out of millions of dollars and now he's after her. Oliver, the leader of the Camel Club, has a very sketchy past as a government agent, and now someone is after him.  Both must work together and with the help of the rest of the gang to live another day.

I finished the second book in this series quite a few months ago.  It took me a long time to start it up again for two reasons:

1. They left the second book off in an unexpected cliff hanger.  I hate cliff hangers.
2. The audiobook for The Collectors had three separate readers.  It was completely and utterly obnoxious.

Both of these issues were corrected in this installment of the series.

I am a big fan of the four members of The Camel Club.  They are extremely unique characters.  As government conspiracy theorists who battle those who do wrong in high ranking positions, you would expect them to be slick, young, respectable fellas. This is not Baldacci's approach.  The characters range from Oliver, who is a former CIA operative who faked his own death and now sits outside the White House with a sign that reads "I want the truth", to Caleb, a lowly little librarian who is terrified at the idea of breaking the law or firing a gun.

The story was a fun one, although I am still not a fan of Annabelle.  I really would like her to go now, but it looks like she's here to stay.