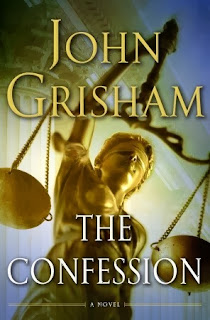 The Confession by John Grisham

A priest meets a new patron of his church one day, only to find out that the man is a convicted rapist who is now confessing to a murder he committed years before. He has an inoperable brain tumor and is on the verge of death.  There is also an innocent young man on death row for the murder who is days away from execution. The rapist refuses to go to the authorities and instead wants the priest to help him jump parole and go to Texas to confess to the man on death row's attorneys.  What is the priest to do? Can he save the young man from execution?  Can he trust the convicted criminal to follow through?

This is yet another gem from John Grisham.  The story keeps you wanting to go further and further and never put it down. The characters are in depth and complex.  The rapist is initially hated (well always hated), but as you learn about his life, you start to see just how troubled his life has been.  The priest is incredibly sympathetic as he battles his conscience.  Do you help a murder break the law to attempt to help another?  What if its all a lie? Its a complex story with a fantastic grip on your senses.

What more can I say other than "Read it!"?