Their Eyes Were Watching God: 4 Stars 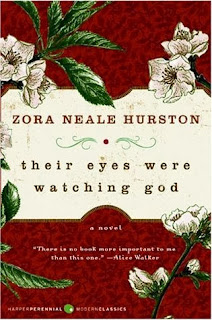 Their Eyes Were Watching God by Zora Neale Hurston

I work with a few teenagers in my community. One of them is in an advanced English class in high school.  One of her assignments was to pick a classic book from a list and chose an adult to read it with, and then email back and forth with about the book.  She asked me to help her with the assignment and chose Their Eyes Were Watching God, which I had never read before.

Here is a lot of what we discussed, so there are a lot of SPOILERS!!!!!

The story is about an African American woman named Janie living in Florida not long after the slaves were freed in America. Janie was raised by her grandmother, who was a slave, but Janie never was. She married one man per her mother's suggestion, but never loved him and eventually ran off with another. That man treated her poorly and she eventually ended up with another man.

It took me three tries to get started.  The dialect the language is written in is hard to understand until you get used to it.  Even then, you may need to reread certain parts a few times to grasp it. I think the author wanted to give a more accurate representation of the time and atmosphere of the community Janie lived in. Janie was married to a "safe and secure" man who would keep her in a home and fed.  But Janie never loved him, and even more, he never loved or respected Janie. I think the reason her grandmother wanted her to marry the man so much has to do with how her grandmother was raised. She was a slave.  She was in someone else's control and was considered inferior (by others as well as herself). She lived in fear (I am assuming this since she ran for her life after having her master's child). Safety and security were so elusive in her life, that she wants that more than anything for her granddaughter. But Janie grew up very differently.

Janie grew up free. She didn't even realize that she was a different color until she was a bit older. While blacks were still not accepted, they were no longer slaves.  They were free and Janie never knew the slave life. On top of that, Janie was a very light-skinned black person. While whites didn't accepted her, she was considered to be a superior black (both in and out of black communities) because of this. Because of the difference in how they were raised, I think Janie had a very different priority when it came to her life. Safety and security, while important, were not the most important. I think that's why she ran away with Jody (by the way, Janie and Jody are so similar it would occasionally confuse me in the book). Janie saw happiness and love with Jody.  But she was wrong. Jody didn't love her the way she wanted to be loved either. I kind of think he loved her because she was whiter than others. And back than, that was power. And power was what Jody really loved.

Teacake (yep, definitely an odd name) on the other hand likes Janie for who she is as a person.  He loves just talking to Janie. To others, Teacake is a poor man who is a few social classes below Janie who must be after her money. But Janie knows that isn't true. Teacake just loves her and wants to be with her all the time. And she loves him too.  She loves him so much, she would rather be out working beside him, then home alone. Money, status, and power don't seem to matter as much in their relationship. Janie changed with Teacake. I think she let herself be free.  She learns things she is interested in and speaks her mind, without fear. I think they have a pretty incredible relationship.

I also think Janie has learned to stop being so concerned with what others think. She has let it influence so many of her decisions.  She let it keep her silent when she was married to Jody even. She wasn't happy when she was doing what she thought she was supposed to do in the eyes of everyone else. And now, with Teacake, everyone does not agree with her but she's actually happy. It reminds me of a bit of Janie when she was a child. Her grandmother talks about how Janie ran around, free with the kids she was raised with who were white.  She didn't have this image of who she was supposed to be, she was just herself.  Then she saw that picture of her and realized she was black.  Soon, she was prey to all the social expectations of that. She started living the life she thought she was supposed to live based on the social structure around her.  I think it took Teacake to take her back to that kid who just wanted to be herself.

I think the way Teacake died showed how far Janie had come in finding herself. In the beginning, she married the man her grandmother wanted. Then she ran away with Jody and was silent and kept her hair up.  But with Teacake she grew.  She stopped caring about what everyone else thought and decided to make herself happy.  So in the end, rather than sacrificing her life for Teacake, she saved herself and killed the love of her life (who was going to die anyway). She finally knew who she was and valued herself and her life.

My book had a message at the beginning about the book and the author. Her book was not well known at all. When it was written, she received a lot of criticism for the was she represented the Civil Rights movement. Like many great writers, her work was relatively unknown until after her death. But I think the reason that her work was "looked down on" was that she viewed the Civil Rights movement as a chance for African-Americans to be able to focus on finding themselves and true happiness, rather than changing the world.  She saw it as a chance to live a fuller life, just for themselves. Janie's story didn't talk about her standing up to whites and changing they way they saw and treated her.  In fact, there were very few whites in the story.  Janie's journey was all about changing the way she saw herself.

I went back and reread the first chapter after I was done with the book (because I didn't understand it the first time).  The very first line talks about ships out on the horizon. The end of the book, it talks about Janie pulling in her own horizon.  I thought it was interesting that the book started talking about external objects in the distance (the ships) and in the end, Janie pulls in her own horizon.  She stopped worrying about the world around her because she was happy with herself.

I noticed that the title of the book was quote during the most chaotic point of the book during the hurricane.  It was almost like they realized that the couldn't control the chaos of the world and that their would always be something. But that doesn't mean you.
Posted by Unknown at 6:00 AM