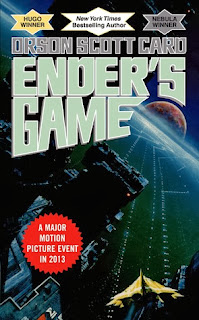 Once again, I chose this book because I was reading through the alphabet this year and I needed and "E". I am not a huge fan of science fiction novels, so I had a feeling right of the bat that I wasn't going to be a huge fan.  In fact, if it weren't for the fact that I needed and "E", I never would have read this book.

Ender's Game takes place in a future where the Earth is not only overpopulated, but under attack from an enemy force known simply as "Buggers". Due to both of these problems, families in the United States are limited to two children each.  Anything over two, and the government will monitor your kids and eventually take one. Such is the case with Ender Wiggins. At the age of 6, he is taken from his family to join the training group against the Buggers.

In school, someone is always watching and monitoring Ender, manipulating every action. Ender is praised immediately by the instructor, leaving him an outcast amongst his peers. He must learn to thrieve on his own, with no one to help guide him, at the age of 6.

Back on Earth, Ender's siblings are left to their own devices. Ender's older brother, Peter, is evil and sadistic, hellbent on world domination. On the other hand, Ender's sister, Valentine, is sweet and loving. She truly loves and misses Ender, secretly celebrating his birthday each year without him.

Valentine, although begrudgingly, eventually decides to help Peter achieve world domination.  Each of them creates a false persona on the internet system, to avoid anyone finding out they are children. Peter knows that if the Buggers are defeated, the world will fall into chaos, making his goal achievable.

I found this book to be very well written.  It had a fantastic underlying meaning about war and our mindset about war.

However, I was not a fan of the book.  Besides that it was a science fiction book, there was one element missing from this book that I felt it really needed:  hope.  You feel no hope in this book at all. Ender goes off to become cold and hard, growing up in a environment all about competition and war, with no love. The world below also seems to be void of love.  Not only do the siblings left on Earth show no love for each other, but you feel little love from their parents.  You know full well that even if the Earth is saved from the Buggers, it is not saved from the likes of Peter.

While I understand Card's approach with the story, the lack of hope made for a glum read  Not only that, but the characters came off cold, and to me at least, less likeable.  Even at the end, I felt Ender was a cold,  wholly unhappy person. While I believe this was the author's purpose, it did make me less likely to read anything by him again.
Posted by Unknown at 5:00 PM