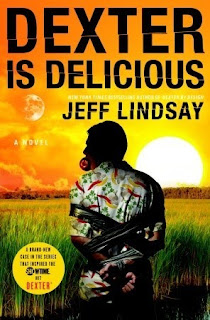 Dexter is Delicious By Jeff Lindsay

This is the 5th installment in the Dexter series.  In this one, Dexter becomes a father.  When this happens, something strange starts to happen to Dexter: he gets feelings. While trying to sort out this new element to his life, Dexter decides to stop killing. This becomes difficult when his serial killer blood brother from the first book comes back and starts to spend time with Dexter's family.  Not to mention their are two young girls missing and it looks like they were taken by vampire cannibals.

I have been a fan of these books, but this one didn't do much for me.  First off, I really enjoy the element all about Dexter trying to navigate through life without emotions. I love the psychological element and look and social norms. By adding in emotions to Dexter, he didn't work anymore. And it barely made sense.  There was very little consistency.

Second, seriously, how terrible of a police force is in Miami? Debra and Dexter definitely did not solve this one so much as they lucked into it.  They were acting really dumb in this one and if they had done this on a really police force would have been fired halfway through the book.

Not my cup of tea.  I hope I get the Dexter I know and love back in the next one.