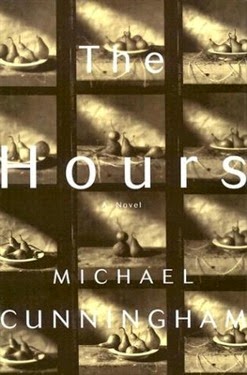 The Hours by Michael Cuningham

Virgina Woolfe committed suicide in 1941 by filling her pockets with rocks and throwing herself in the river. But back in 1923, she was more hopeful as she wrote the novel, Mrs. Dalloway. The book is about a woman who is happily married and preparing a party for her husband. But she harbors the secret of her true love, Sally. Virginia spends time with her sister, nieces, and nephew, knowing deep down that she will never have children and will likely let her depression consume her.

Laura Brown is preparing a cake for her husband, and is reading Mrs. Dalloway in 1949. As she in the kitchen preparing, she shares a kiss with Kitty, who she secretly loves as more than a friend. Consumed with the need to be alone, she leaves the house and ends up in a hotel room to read. While she does eventually return home, suicide keeps coming back to her mind. What seems to hold her back from it throughout the day is that it would sadden her husband and son and kill the child she is carrying.

Clarissa Vaughn is preparing for a party in honor of a poet friend, Richard, who is dying of AIDS in 1999. He is Laura's son. She lives with her partner, Sally. She is like the modern day Mrs. Dalloway.  Clarissa reflects upon her life and those she has been in relationships with in the past, mainly Richard.

I wanted to like this book far more than I actually did. In fact, for the first few chapters, I thought, "I must recommend this book to everyone I know!". However, by the end of the book, all I could think was, "How did this win a Pulitzer Prize?"

While the books seems beautifully written, the words don't flow well. The book comes off more like a pretentious author who wants to show of how eloquent he can be, rather than telling a story. I found myself rolling my eyes several times at the way the novel was written and wish the author had set his ego aside for a bit while he wrote.

One of the issues I had with the book was the language used in Clarissa's tale. Now, swearing doesn't bother me at all in books, unless it seems forced and out of place. This was exactly the case with Clarissa. She rarely swears, but uses the word "fuck" often. The word comes off out of place and forced, like a cheap attempt to remind us that Clarissa is in modern times. His writing is done well enough that the reminder is not needed. If he had used language throughout the whole book and more than just the one word, it wouldn't have felt so forced or out of place.

I also struggled with all of the characters.  They were unlikable and this made it difficult to care what happened to them. While I can see that Cunningham was trying to show the change of social acceptance of lesbianism over the decades and the effect this would have on women who are arguably lesbians, he failed to make the characters sympathetic. I was truly disappointed.

Recommended for those who enjoy: modern tales of classics, LGBT, and mental issues.
Posted by Unknown at 6:00 AM