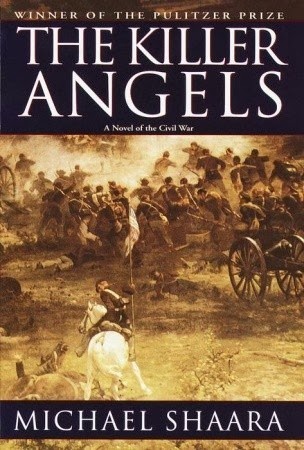 The Killer Angels by Michael Shaara

As part of my Pulitzer Prize Challenge, I read the book The Killer Angels by Michael Shaara. The book won a Pulitzer Prize for fiction in 1975, but did not gain popularity until 1993 when the movie Gettysburg came out, based on the book.

The book is a novelized version of the Battle of Gettysburg. Shaara centers around specific people on both sides on the Civil War, giving a unique view on the war itself.

Now, as a kid/teenager, I remember learning about the Civil War in school.  We were always taught that the war was started because the North wanted to free the slaves and several states in the South did not.  The South revolted and the war began. It wasn't until I got to college that I realized that history books do not contain all the facts, are generally biased one way or another, and that the war was over many things.

The Killer Angels illustrates this fact, especially with the character of Chamberlain of the Union. As a college professor who left his cozy job to fight in the battle, Chamberlain is more educated than the typical solider. While he believes himself to be fighting for the liberation of slaves, he finds that this is not necessarily true with many of his comrades.  He finds them to be incredibly racist and is disgusted.  This is until he comes across a freed slave and feels repulsed.  He is then disgusted with himself.

The book also focuses on Longstreet and Lee of the Confederacy.  Lee is a respected solider and general who is stuck in his ways.  Longstreet, while he respects Lee, often disagrees with Lee's tactics, arguing that they should take a defensive approach.  Lee refuses and eventually, very confident in his men, he orders Pickett's Charge.  Needless to say, this is a rather bloody battle and marks the unavoidable end for the Confederacy.

The book also talks about two men: Hancock and Armistead. These two men are good friends, but each take a different side.  Throughout the war, they worry about each other and finally face each other in the Battle of Gettysburg.  This is just Shaara's example of just how difficult the war was, fighting neighbor against neighbor.

The book also talks about the challenges of the generals on both sides, especially those in the Confederacy.  Many used to be in the United States Army and feel great sadness in fighting the the very people they once fought to protect.

At the end of the day, even though this is a novel and technically fiction, it illustrates just how complex the Civil War was for those who fought.

Beautifully written. I would like to read more by Michael Shaara and his son, Jeffrey.

Side note:  One of the Confederate Generals is a man named Jubal Early.  I recognized this name from the final episode of Firefly, Objects in Space.  Joss Whedon found out that Nathan Fillion is a descendant of the man and named the character after him.  The actor who plays Jubal Early is, ironically, African-American.

Rating: PG-13 (only in that it is a very bloody battle)