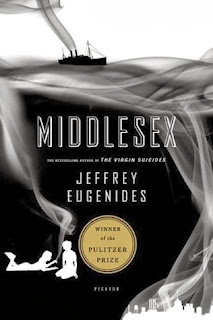 For the first step into my Pulitzer Prize challenge, I decided to read Middlesex. I had actually purchased this book from Powell's Bookstore the last time I was in Portland, so it was a logical first step.

Middlesex is about a hermaphrodite named Cal/Calliope in the 1960's. Calliope was born a girl and at age 16 discovered that she was actually more genetically a boy and became Cal. The novel starts by telling us about how Cal's father wanted to give his wife a daughter so he tried different tactics upon conception to make the baby a girl. Cal's grandmother predicted that she would be a boy, despite the father's attempts to make a girl.  I guess, somehow, they both ended up right.

The story then goes back to Cal's grandmother, Desdemona. Desdemona was born in Greece and decideded to escape to America with her brother Lefty.  Having fallen in love with Lefty, Desdemona did not tell anyone that they were actually brother and sister once they left Greece, and they themselves tried to forget that fact.  It wasn't until they conceived their first child that they found out the genetic problems that can occur when siblings procreate.When their son was born without any issues, they assumed they were safe.

At this time, Lefty and Desdemona are living with their cousin, Lina and her husband Jimmy.  Lina and Jimmy are also pregnant and they have a girl.  Desdemona and Lefty's son eventually marries Lina and Jimmy's daughter and together they have two children: Chapter Eleven and Cal.

The story jumps back and forth between Cal's story and the story of his grandparents.

Cal eventually falls for his friend, a girl, when he is 14 years old. He has sexual encounters with both her and her brother.  After an accident, Cal is taken to the hospital and his intersex issue is discovered. Cal runs away, assuming for the first time the identity of Cal.  It is not until the death of his father that Cal discovers from Desdemona that his grandparents are actually siblings.

Wow....that was my first reaction. This book is easily one of the most unique stories I have ever read.  It incredibly interesting to read about Cal and the struggles he has in life.  He struggles to find his place in a world that neither understands or accepts him. He hides his past and hates that is ashamed.  He wants to be able to just be himself.

My younger sister had a friend in elementary school with this particular challenge.  He was a boy in elementary school (although upon meeting him you would swear up and down he was a girl).  When they transitioned into middle school, he went to a different school where he knew no one and became a girl.  Although he/she lives in a much more accepting time that Cal, society still struggles with the acceptance is this rare, yet not unheard of issue.

I enjoyed the uniqueness of the story and they way it was told.  It was very eye-opening. There were a little more sexual encounters than I am comfortable with, but they were applicable to the story so I understand them.