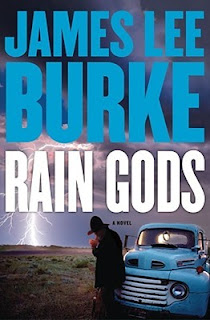 My reasoning behind choosing this novel is all because of my dad. For years, my dad has worked a job that involves him being in a truck driving around for hours. (He repairs and installs pop machines and many of his customers are in other cities and/or states). He gave me this book to listen to with one question: Is the book really good, or does the reader make it really good?

The reader is none other than Mr. Will Patton, an actor I happen to adore. So of course I took the book and gave it a try.

The book is the second in a series about Sheriff Hackberry  Holland, the sheriff of a small Texas town not far from the Mexican border. After receiving a mysterious phone call about shots being fired near an old abandoned church, Holland goes out to discover the bodies of nine Asian women buried in shallow graves. He digs them up and calls for reinforcements. It doesn't take him long to figure out who made the call.

Pete is an ex-solider who has trouble adjusting to civilian life. After getting mixed up with the wrong people, he makes a call and then takes his girlfriend on the run. Not only are the running from the cops, but they are running from a psychotic criminal and a holier-than-thou religious hit-man. Needless to say, the story started out with a bang.

The story was intriguing. With all the different characters, it winded and twisted all the way to the end. What I really enjoyed about this tale were the strong women. Instead of just doing what their significant others tell them to do, and following like children, these women took their own path and stood strong on their own.

So the answer to the question?  That would be both. The book was really goo, but honestly, without Will Patton would have received 3 stars. Will Patton added so much  emotion with his voice that even simple phrases carried a strong non-verbal communication with his tone and cadence. I must find more audiobooks by him!