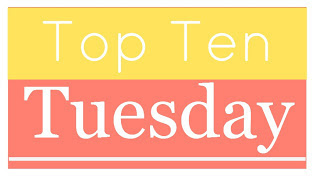 Since I am fairly new to the book blog world, I have decided to follow in the footsteps of some others that I follow. The Broke and the Bookish has a Top Ten Tuesday theme and for this week, its most intimidating books.

So I decided to play along this week and here is my list:

1. War and Peace by Leo Tolstoy: Like most people, this book by sight alone is intimidating. Weighing in at around 1392 pages, the book is rather large and older. Not to mention I often have a difficult time following war novels. But its a classic, so I want to read it.

3. Dante's Inferno: This classic is referenced often in the media, most recently by Dan Brown. But, this book is actually an epic poem.  And it goes with two other books/epic poems. I am not the best at deciphering poetry as is, much less a metaphysical poem that is the length of a book.

4. The Prisoner of Heaven by Carlos Ruiz Zafron: The only non-classic on my list is The Prisoner of Heaven. What's the intimidation you  ask?  Simple.  I LOVED The Shadow of the Wind. The book was amazing and I couldn't put it down.  The Angel's Game was far more disappointing. I really really want to like this book. But I am afraid that I might not.

5. The Jungle by Upton Sinclair: And here is yet another classic. My husband read it and loved it. The intimidation comes easily with this one:  I love meat!  Apparently this book turns many a people into vegetarians.

6. Lord of the Flies by William Golding:  Once again, this one I want to read because it's a classic. The intimidation is that the book is incredibly depressing.

7. The Three Musketeers by Alexander Dumas: In college I read The Count of Monte Cristo. It was amazing and easily one of my favorite novels of all time. However, it took me three tries to get through it and took me months to read. I am a slow reader anyway, but Dumas has a unique way of writing. It was not an easy read. It was a labor to get through, but totally worth it. Ten years later, am I really ready for another Dumas?

8. Moby Dick by Herman Melville: Here is another classic. I know it's about a guy chasing a white whale, but its really long. There's got to be more to it than that, so I want to read it.  But I know (stop reading now if you hate spoilers) that the narrator gets axed half way through. Really?  Killing the narrator?  Weird!

9. The Canterbury Tales by Geoffrey Chaucer: Oh boy, I have been a fan of Chaucer since high school. But I must admit, of the few stories I have read, each one has been translated into modern English. Chaucer wrote in Middle English. My intimidation with his one is that I am scared I won't understand it.

10. The Call of Cthulhu by HP Lovecraft: This isn't even a book; its a short story.  But here's where I get intimidated:  H. P. Lovecraft is iconic. He's considered to be one of the best horror writers. I love horror.  But what if I don't like Lovecraft?  I am not cool or hip, and therefore am worried I won't really get it. Can I really still consider myself a true horror fan if I don't like Lovecraft??

The worst part of this list is that I own  EIGHT of them. While they don't really compare to the list of books I won and have never read, that is still eight more books that I need to read. I guess I really should at least pick one and dive on in!