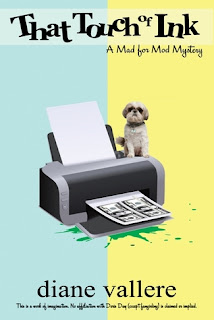 That Touch of Ink by Diane Vallere


This is my first ever ARC (Advanced Reading Copy) book that I have recieved so I was very excited.  I won the book via a Goodreads giveaway. Here is my very honest review:

This is the second book in the Mad of Mod series. I have not read the first book, but the author sums up the previous book so its not necessary that you read it (although I would recommend it since so much of the story depended on the previous).

Madison Night is an interior decorator with a  very specific niche. This is namely Doris Day, whom she has modeled her life after. Her little business specializes in creating decor based on the Doris Day era, with the help of her handyman helpier, Hudson. Hudson was accused of murder in the previous book, but Madison never believed it and helped prove him innocent. Needless to say, Hudson is interested in moving their relationship past "work" and into something a little more personal.

But Madison is dealing with an annoying ex that just won't go away.  Brad was the love of her life, but broke her heart by revealing he was married. After two years of being gone, Madison had learned the truth about Brad; a truth she couldn't really deal with. Brad was never married but was mixed up with the wrong people and needed to keep her safe. But he knew her price; a $5,00 bill.

Madison was shocked when one arrived at her door, followed shortly by Brad himself.

This great shock is short-lived as she will soon be shocked by the discovery of a dead body. She immediately calls her cop friend, Tex; the man who was there when she found out about Brad. While he has a semi-girlfriend, he only has eyes for Madison.

Now if you are keeping track, that is THREE men who are interested and pursuing Madison. If you add in finding a murder victim, stumbling upon two more $5,000 bills, and slowly uncovering a kidnapping plot, then it goes without saying that this woman has her hands full!

The story was cute and engaging. It kept me guessing until the very end. I also loved the little references to that era like Archie Leach (Cary Grant's real name). I must admit that I am a sucker for hidden references throughout books like this, epsecially when they involve Cary Grant!


So you are probably wondering why I rated it 3, and not 4 or 5. Well, I had one major issue with the book:  Madison Night. I did not like her. In fact, I thought she was rude and completely unlikeable. Three men pursuing her romantically made very little sense to me, because she wasn't terribly nice to any of them (except maybe Hudson for the whole helping prove he wasn't a murderer thing). Also, I felt like she reacted minimally to very big things, and overreacted to tiny things. For instance, after finding a dead body, she calls Tex and not 911, even though her reasoning for being there was explainable. But that I can vaguely understand and move on with.  But then she heads home only to be rammed by another car AND find out someone was in her apartment.  But this didn't seem to need a call to the police.  Why?  She had already bothered Tex.  Any sane person would call the police right away.

I guess I just didn't understand or relate to her at all. It made it difficult to get into the story hen she was the main character.  I would have much prefered the story from Tex's point of view.  Perhaps her charatcer was lovable in the first book and that should have endeared me to her, but alas, I have not read it.

Anyhow, I do recommend this book, especially for anyone who is a fan of Doris Day. And really, can you watch Calamity Jane and not be a fan?
Posted by Unknown at 11:30 AM