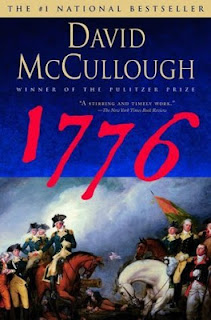 It's almost the Fourth of July so I decided to review something patriotic. It's also a book that sat on my "to-read list" for years.

I guess I should have read the back of the book before reading this one. I have wanted to read it for awhile under the assumption that this was about Congress in 1776 and their tale in coming to the point of declaring independence. This book is actually about the war, mostly following George Washington. Although I was looking forward to hearing all about John Adams, Ben Franklin, John Hancock, and more, I do already know quite a bit about that. What I knew very little about, was the war itself, so this book was extremely educational.

As for David McCullough's writing, I was incredibly impressed. He kept the tale engaging without altering the information. If he wasn't sure if it was true or didn't have the actual account, he let you know. There was no glorifying what happened to make the book more compelling. He let the facts guide the story. Also, his research on this was intense. He sited more sources that I thought even existed for this, British and American.

As for the tale itself, I always heard it was a miracle we won and that we were so novice compared to the professional British Army. But this book really highlights just how close we came to losing on several occasions. Also, I knew I would like the book when David McCullough started out with and ACCURATE portrayal of King George. From the American perspective, he is viewed as a tyrant and rich, pompous king. The truth is, he was actually a pretty good king.

I highly recommend this book to anyone.