The Great Gatsby: 3-4 Stars (depending on my mood) 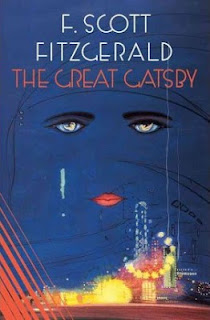 While looking for himself and where he belongs, Nick Carraway moves to New York. His cousin, Daisy Buchanan, and her husband, Tom, also live in the city. They are rich, popular, and social. They are also unhappy. Tom's affair is far from hidden. Eventually, they introduce Nick to another socialite, Jordan Baker. Nick and Jordan even begin dating, but Nick never seems to be completely interested.

Then one night, Nick realizes he lives next door to the great and mysterious Jay Gatsby. Known for his extravagant parties, very few seem to actually know the man himself. But soon this changes for Nick. Gatsby begins to socialize with Nick, but not without reason. He is in love with Daisy and always has been. He grew up poor and due to his social status compared to Tom's, Daisy had chosen Tom. Gatsby had spent years making something of himself. He threw the lavish parties in hopes that Daisy would soon arrive. Seizing his opportunity, he gets Nick to arrange a meeting and soon Gatsby and Daisy are having an affair of their own.

This is when big problems arise. While Gatsby is infatuated with Daisy, Daisy is only out to make Tom jealous. After a night of unspoken slights and jabs, the couple and Gatsby get in a large argument and Daisy and Gatsby leave, only to find tragedy.

I was torn on how to rate this book. The plot left me disgusted with people and I found myself sympathizing with only one person, Mr. Wilson. But, to be completely honest, I think that is how Fitzgerald intended it. If so, he accomplished his goal. He has a beautiful way of writing that I envy. I was mildly disappointed with some lack of character development, but I supposed it is because these people lacked character. Again, I believe this was intentional.

Either way, I'd recommend the book, but do not promise you'll enjoy the story.
Posted by Unknown at 5:00 PM