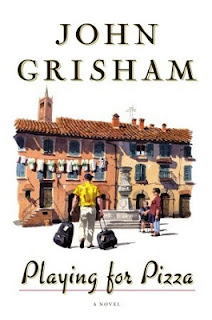 Playing for Pizza by John Grisham


As always, John Grisham captures my attention in a wonderful story. Unlike his law novels, this book has a much lighter story. A washed out football player who is unable to let go of the game, runs to Italy to play on there less-than impressive league. He is running from angry fans, a pregnancy cheerleader crying, "he's the father" and the reality that he won't make it in the NFL.

In Parma, Italy, he sits, cocky and arrogant. The city and other players show him a new reality and he begins to change. While the game is not even close to the caliber as the game in America, the friendships are of a higher caliber. Without doing anything bu showing up, he instantly has friends. Not just the kind of friends that will wave if they see you in public, but the kind that go out of their way to help you. He becomes torn in his desire to stay with the new culture and the need to prove himself a real football player in the NFL.

The story is simple and low action, but captivated me none the less.
Posted by Unknown at 5:00 PM