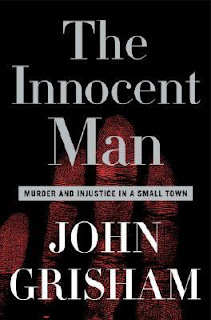 The Innocent Man: Murder and Injustice in a Small Town by John Grisham

Once again I was shocked by not reading the back of the book. I simply chose this book because I love John Grisham. I did not know until over halfway through the book that this was nonfiction.

The book was sad and alarming. Not only is the fact that two men were wrongly accused and convicted of a murder, but for many other reasons. When investigations become focused on wrong parties, the victims family does not get justice and real killer does not get punished and is at risk for causing more heartache and pain with future crimes. But aside from the tragedy of the particular injustice, there leaves the sadness of a family who was desperately seeking help for a son and brother with deteriorating mental health. The fight was hard enough before the false accusation.

Grisham did a fantastic job of telling the story, despite the fact that you knew the outcome before it arrived.
Posted by Unknown at 5:00 PM