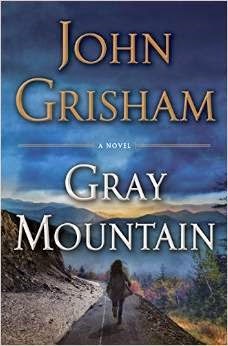 I finally got around to reading the new novel by John Grisham.  And by finally, I mean it was released about two months ago and I have had a hold on it at the library and I finally got to the top of the list. Grisham is one of my favorite authors. His characters are in-depth and imperfect and he knows how to capture your attention.

Samantha Kofer is three years out of law school and working her way up the corporate ladder at her law firm when the economy dips. Like many lawyers at her firm and others, she is left jobless. With little chance of finding another job like the one she had, Samantha accepts the year long furlough from her employer and begins to seek out a non-profit lawyer gig. But considering every other law firm in New York has done the same to a thousand others, the non-profit jobs in New York have all disappeared. Samantha begins her search outside of the city she loves.

In the Appalachian mountains, there is a small legal aid clinic where Samantha tries her hand.  On the way to the interview, she is arrested for exceeding the speed limit by a southern, backwoods deputy who clearly is on a power trip. Frustrated and confused, she is rescued by local lawyer, Donavon Gray. Now the place that looked the worst, suddenly has a bright spot, and Samantha eventually agrees to work at the clinic, conveniently owned by Donavon's aunt. If you think you know where this story is headed, you are wrong.

Unlike most of his novels, Gray Mountain has a female protagonist (I have heard Pelican Brief does as well, but I have yet to read that one so I can't say one way or the other). My biggest complaint with this is that she was rather unlikable. She was self absorbed and, even in the wake of tragedy, finds ways to make it all about her. The stories outside of her were compelling and interesting enough without adding the drama of an attention hog.

My other complaint about her character was that so much of her character revolved around her romantic relationships. I felt like her every move in life revolved around men, even men who she barely knew and never had a romantic relationship with.  An indication of a possible relationship was enough to make her change her life plans. This is not so with Grisham's other lead characters in books, and I wonder if he did that simply because she was a woman. While I am not calling the author sexist is any way, the description of her was too sterotypical and obnoxious.

Aside from my complaints about the main character, I loved the story. Just when I thought I knew exactly where the story was headed, everything I knew was shattered and the story took a completely different approach. The side characters were well developed and engaging. He kept me completely intrigued all the way to the end.

Recommended for those who enjoy: Legal drama, female leads, and mysteries.