A Confederacy of Dunces: 4 Stars 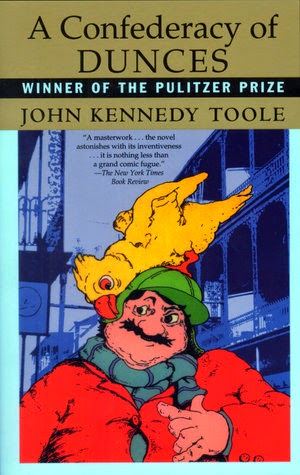 A Confederacy of Dunces by John Kennedy Toole

This Pulitzer Prize winning novel was written by a man I had never heard of. I did a quick search on him to see if I knew any of his other books before I  read this one. What I found was nothing short of tragic. At the young age of 31, Toole took his own life. He was unpublished. His mother found the manuscript for The Confederacy of Dunces, which had already been rejected by publishers and began to try and get it published. It wasn't easy, but she eventually succeeded and the book won a Pulitzer Prize. His mother was able to publish another book by him that was made into a movie. It is just so tragic that Toole did not live to see his own success.

In A Confederacy of Dunces, we join Ignatius J. Reilly in his life. Ignatius is a self-centered, lazy man who lives with and relies upon his mother. He is self-important, cocky, and arrogant. After a run-in with the police, he and his mother end up in a run down bar called Night of Joy, where they soon learn they are not welcome. Upon leaving, they end up in a car accident. With high bills to pay, Mrs. Reilly puts her foot down and makes Ignatius go find a job.

Meanwhile, a cop, who had had an unfortunate run in with Ignatius earlier, was being tormented by his boss and was forced to dress in a different ridiculous outfits. When he told his Sargent about the Joy of Night club, the boss then made him sit in a bus stop bathroom stall for eight hours a day.

Ignatius eventually found a job at the Levy factory.  But it didn't take long for him to cause an uprising that ended in mutiny. The main reason for the uprising is because Ignatius was out to impress an ex-girlfriend by being involved in a social cause. Unsuccessful, he was out to find a new job.

This book was filled with humor and politically incorrect wit. From beginning to end, this book doesn't let up.  My favorite character was Angelo Mancuso, the patrolman who had numerous unfortunate encounter with Ignatius and, therefore, got into more and more trouble.

Ignatius is a genius who is too arrogant and self-centered to ever be of value to anyone, including himself. His sits on his fat butt day after day talking about how much better he is than everyone and how beneath him people are, and then whines to mommy when he's hungry. He wreaks havoc at every turn and is just a disaster. In the meantime, I am laughing hysterically at each blunder!

Recommended for those who enjoy: offbeat humor, farces, and political incorrestness.