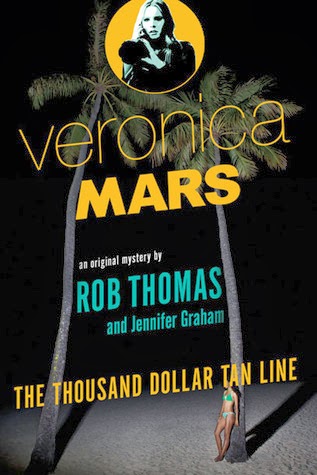 The TV show Veronica Mars is one of my favorites of all time. Veronica (played by Kristen Bell) has such spunk and sass, while still being vulnerable and sweet.

The first season was beyond brilliant/amazing and I couldn't get enough of it!  The second season was pretty great, although it wasn't nearly as good as the first.  The third season was very disappointing...and then it ended....crappily. (Ok, so crappily isn't a word, but if you saw the show, you know it's the perfect way to describe it.)

So when they announced that through Kickstarter they had funded a movie, I was beyond excited and took the opportunity to re-watch the entire series (adding a couple of sisters to my obsession).

The movie was excellent and righted all the wrongs in season three.  And there was this....


Anyhow, the movie ended and I thought "Sad day...no more Veronica Mars".  And then, like some miracle blessing, they decided to start a book series!  This was one world/group of characters I was not ready to let go of, and thanks to Rob Thomas, I don't have to!

The book picks up right where the movie left off and didn't miss a beat. Veronica is now a private detective in Neptune...again. When a young girl goes missing during spring break, she is hired to find her and save the tourist industry. But this is easier said then done when another girl goes missing, and this time, it's a little more personal.

I loved this book! Seriously, it was awesome and didn't miss a beat. The characters we knew and loved from the series were in the book and were the same as we remember them. The author doesn't change the past at all and even brings up several plot points from the TV series and movie in the book, since they play a role in Veronica's life now. Excellent job!

I will note that this book is probably best read by fans of the show and movie. If you have seen neither, you may get a little lost/bored/not nearly as excited as me.

Recommended for those who enjoy mysteries, sassy female protagonists, and humor.