The Last Olympian (Percy Jackson and the Olympians #5): 3 Stars 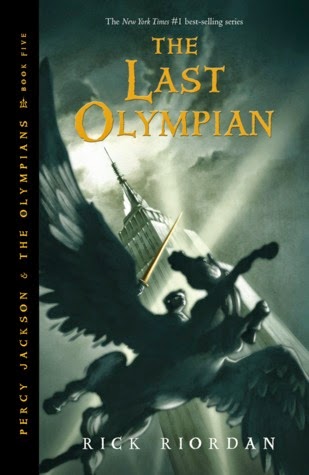 The Last Olympian by Rick Riordan

This is the final book in the Percy Jackson and the Olympian series. The fight against Kronos has reached the final battle. Annabeth, Grover, and Percy must now face Luke, a task Annabeth is heart broken over. But with all the gods busy trying to keep the world in order, Mount Olympus is vacant and it's up to Percy to save it. It doesn't help that Mount Olympus is in the Empire State Building in New York; the same New York Percy's mother and step father are in. He must succeed, or all is lost.

I love the way Riordan's mind works. This entire series is based on a prophecy; a prophecy everyone assumes is about Percy. Percy is the hero afterall.  He's Camp Half Blood's golden boy. But what if they are wrong?

Riordan always keeps me guessing and never stops surprising me. I love that. I find some children's books far too predictable, but not his. His books are funny, engaging, and entertaining.

That being said, sometimes the teenage angst is too much for me. While it's true that teenagers are emotional and not always logical, it doesn't mean it doesn't drive me crazy.

Recommended for those that enjoys: children's books, action, adventure, mythology, and humor.
Posted by Unknown at 6:00 AM