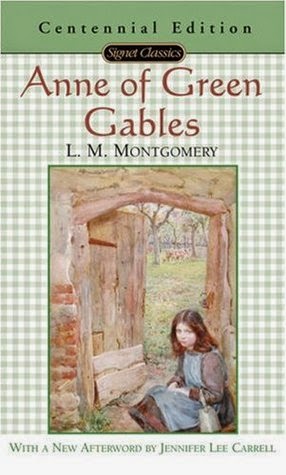 I grew up with my sisters watching Anne of Green Gables on TV all the time (whoo hoo PBS!).  I was too young, and since the show didn't involve turtles being taught ninjutsu by a rat, I was not interested. By the time I was old enough to be interested, my older sisters had moved on and PBS rarely showed it anymore. And that is how I grew up to know of Anne of Green Gables without knowing much else. In fact, I often confused her with Pippi Longstocking.

Anne (not to be mistaken for the spelling of Ann) is a young orphan girl who was sent to a brother and sister by mistake. They had wanted a boy to raise to help on Green Gable as they were getting older and had no children.  Anne was sent by mistake, but after meeting her, Matthew and Marilla can't seem to send her back and decide to keep the chatty 11-year-old.

Anne is a free-spirited girl with a vivid imagination and a curious mind. The book is mostly a collection of short stories about Anne as she grows up and goes to school, and then becomes an adult. She is contrastly different than the sensible Marilla and the quiet Matthew who begins every sentence with "well now".  But their affection for her could not be greater.

L. M. Montgomery was ahead of her time. Considering that this book was written before woman had the right to vote and that a woman getting an education was frown upon, she wrote Anne with a modern attitude. She has her head in the clouds about all the things she could achieve, without restriction. The story is still simple and leaves you with a good feeling. Mark Twain even once said that Anne was "the dearest, most moving and most delightful child since the immortal Alice [in Wonderland]."  I think a compliment from Twain is one of the highest a writer of that time could obtain.