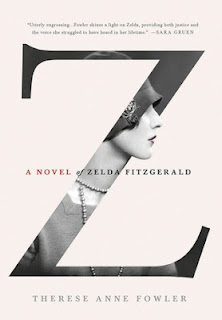 Z: A Novel of Zelda Fitzgerald by Therese Anne Fowler

My reasoning behind reading this book was more for the title than anything else. After accepting a challenge to read a book for every letter of the alphabet, I was looking for a novel for the letter Z. This one was all over the bookstores, so I decided it fit the bill perfectly. I'm glad I did.
After exhaustive research, Fowler wrote a narrative of the much talked about relationship of F. Scott and Zelda Fitzgerald, as if from Zelda's perspective. The two were the "it" couple of the roarin' twenties. Many envied them in their prime and lamented them at the tragic end. I must admit, having recently seen Midnight in Paris, Allison Phil is who I imagined as Zelda and Tom Hiddleson as Scott.

At the young age of 17, days before turning 18, Zelda Sayre met a charming young author named Francis Scott Key Fitzgerald. The two instantly fell madly in love, despite both families against the relationship. He was off to war, and therefore their relationship must wait. Once home from the war, Scott headed to New York to finish his first novel and make money before he'd marry Zelda. Feeling neglected, Zelda purposely manipulated Scott into a jealous frenzy. This situation is one that would be repeated several times throughout their marriage.

Immediately after being wed, the two were soon rich and famous. Scott's alcoholism raged repeatedly in their marriage, as well as his need for approval from society. Scott seemingly gets tunnel vision when it comes to his work, not just wanting to be great, but the best. During this, he seemingly forgets or ignores Zelda. Zelda than goes to extremes to get his attention, often attempting to make him jealous. Due to the jealousy, Scott is never able to fully trust her.

Its sad to read as two great people, slowly become destroyed, despite their clear love for each other. Each spending too much time worrying about how they are perceived by the outside world and less time worrying about how they are perceived by each other. Perhaps if each had focused more on their marriage than making sure society viewed them as individualist, they could have been their for each other when they were needed; Scott for his constant alcoholism, and Zelda for her eventual schizophrenia: the two things that would eventually take both their lives, albeit indirectly.

Fowler does an excellent job of giving a voice to the infamous Zelda Fitzgerald.  Her writing gives you the sense of sass and strong will often associated with the woman. She also did an excellent job of not placing all of the blame of the final outcome on Scott alone, even with Zelda's voice and perspective. She helped give a sense of love and devotion to two people who inadvertently destroy each others lives as well as their own.

I would recommend this novel.
Posted by Unknown at 5:00 PM