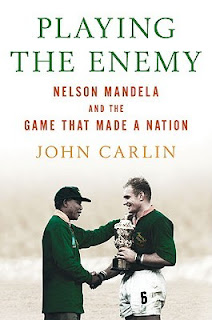 Playing the Enemy by John Carlin

Considering the current condition of Nelson Mandela, I decided to post this review today in his honor.

This is the tale of Nelson Mandela becoming president of South Africa after apartheid ended and his use of the national rugby team to bring the nation together. I knew very little about this before the movie Invictus, the movie inspired by the book, and decided I wanted to know more. To my surprise, the movie doesn't cover much of the book.

The book doesn't really start the rugby tale until over half way through. The rest of the book is the back story, setting up the importance of the game. I loved learning about this. Mandela lived a unique life, and while not perfect, was exactly what that country needed at the time.

After being arrested for terrorism, Nelson Mandela spent 27 years in prison. The powers of transformation that he had were incredible. The prison warden, Colonel Piet Badenhorst, showed his hatred when three judges came to visit the prison and Mandela accused the guards of beating the black prisoners.  Badenhorst said, "Be careful, Mandela. If you talk about things you haven't seen, you will get yourself into trouble, if you know what I mean". Mandela turned to the judges and said "Gentlemen, you see for yourself the type of man we are dealing with as a commanding officer. If he can threaten me here, in your presence, you can only image what he does when you are not here." By the time Mandela left Robben Prison, that same man made a point to come see him and wish him luck.

Other guards Mandela won over by speaking about rugby, and even one grew so close to him, he snuck his eight month old son into prison just so Mandela could hold him.

Mandela knew from early on that sports are a great way to unite people. I, myself, immediately feel more inclined to like someone if I find out they are an Atlanta Braves fan. In fact, I can hate someone, but if they talk about my team, I immediately warm up to them.

One note, this book was definitely written with Americans in mind. Several times while describing the game of rugby, the author used American football as a reference.  He also referred to the world's news crews and named a few as examples, all American. I liked this approach because he explained this from the perspective of someone who knows little about the culture and political struggles at that time, a.k.a ME!

I cannot recommend this book enough. He is such a great man and while his legacy may not be easily forgotten in South Africa, it should not be forgotten here in the United States.
Posted by Unknown at 5:00 PM